“This year feels as if the energy will be on the side of cooperation, tolerance and improvement.” 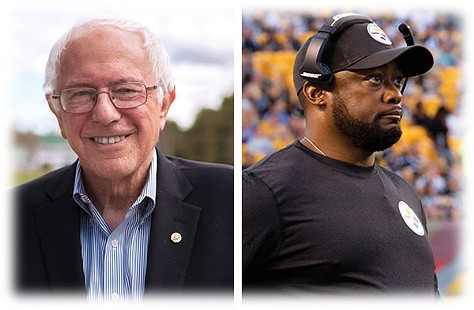 With a presidential election looming, local and national movements for workers’ rights, and continuing threats of terrorism domestically and abroad, 2016 is poised to be a volatile year.

Not knowing what’s on the horizon can cause a lot of angst, so City Paper consulted with three “fortune tellers” to gain some insight into what the year has in store. Tamar George is a psychic coach with more than 30 years of experience. She’s also the organizer of Peaceburgh.com, “a growing, diverse community of Pittsburghers who are working to create a healthy, conscious and sustainable city.” We also spoke with Suzanne Bishop, a psychic medium and founder of Intuit Now, Pittsburgh’s Psychic Salon. And CP got prognostication for Pittsburgh from Ronda Snow, an author and wellness tutor who provides contemporary tarot-card readings.

Some of the predictions were specific. Snow predicts: “The Steelers are not going to have a good postseason, and the Pens won’t win the Stanley Cup.” Snow also says Republican presidential candidate Donald Trump won’t win the election. And two of the other psychics we talked to say Democratic candidate Bernie Sanders will be our next president.

Other predictions were broad, with all three of the intuitives we spoke to predicting that Pittsburgh and the nation will be undergoing a cultural shift. And with predictions like growing public concern for the environment and support for marijuana legalization, it looks like that shift will be to the left.

Predictions are probabilities and based on what the consciousness of the majority is.

I predict in politics that the masses want less corporate influence in politics and will elect Bernie Sanders. As far as education, there will be more of a desire for better trade schools, especially those having to deal with anything that would help distribute goods and services to the masses.

The economy will see a downward spiral with banking and investments. No more bailing out the too-big-to-fail big banks and Wall Street. Silicon Valley and the younger generations will come up with innovative bartering, loaning and new cash-trading systems.

The environment will also be more important, as more and more humans are raising their consciousness and acting as stewards of the planet. Peaceburgh.com is an example of like-minded people clumping together to make positive changes. The world is changing as we know it, and that’s a really hopeful thing.

The overall sense that I get intuitively is that there is a mass awakening of people. What that means is that people, for the first time, are letting go of the ties that bind them to base realities of life and are freeing themselves to the nuances of spirit. There is a big surge of collective energies that are opening up for people, as the walls of what they think is real (right) melt into the intuitive voice. Intuitive voice being that collective stream of consciousness that can sometimes permeate the dream state.

Things are going to get real with increased conflict in the Middle East and other places (boots on the ground), an increase of dangerous weather patterns and events, and populations of refugees at our doors. There is an air of underhandedness coming from governments and major powers like Russia.

Because everything is put on the table in front for all eyes to see — a Plutonian astrological event — corporations and [political] candidates are feeling the backlash of their wrongdoing. Bernie Sanders and Donald Trump will continue to surge in popularity, as they do not represent [the] established status quo and are relatively authentic. Sanders will win the nomination and will become our next president.

Gun violence will continue to plague us, mostly with domestic terrorism. There will even be a few scuffles during political gatherings in the upcoming months as we get closer to elections. There will also be gun-reform happening under Obama. More and more whistleblowers come out of the closet, some to do with alien disclosure. [Bishop also later explained that alien disclosure could come from astronauts involved in the moon landings.] Medical marijuana becomes legal in more states and people begin to protest for its use in cancer treatments.

No major earthquakes in 2016, but the year 2017 has lots of activity. More deadly storms and tornadoes are predicted for 2016.

As more and more people are seeing the reality of life as it really is — again, the Plutonian influence — and people and events that were once in the “hiding of wrongdoing” come to light, people will either let fear or love take them over. People’s basic identity of who they thought they were is challenged by a softening of ego that is part of human evolution happening at this time. As we continue to travel into the Aquarian Age, we let go of the deep-seated belief that we are just not good enough, [for] an even deeper belief that we are not only good enough, but divine in nature.

In summary, things are going to get scary and violent, while at the same time, there will be a lot of love and brotherly support from people to people, mostly shown on social media. Many people are going to band together to protest harmful corporations damaging the earth, and the war in the Middle East. These protests are a reaction to once-hidden activities coming to light. Bottom line is: Don’t let the “reality” of what you see around you cause you to fall into fear. Adjust your natural spiritual antenna to the basic belief that you are deserving of love; serve others and the world, trust your intuition and you will thrive.

Before we start, let me tell you a little about what to expect from your reading. I do things a little differently than other readers. I call my website Modern Oracle because I believe “fate” and predicting the future are outdated, obsolete, useless ideas. Cause and effect is a real thing. What happens in the future is directly related to the things you choose, do, avoid or omit today. The point of tarot readings is to help you understand the situation, make better choices, be a better person and create the future you want — and not just make an old-fashioned prediction and leave you hanging with the consequences. Also, I take privacy very seriously. I don’t read anyone without their permission, so if this reading fits an individual, great. If not, it may just be a citywide-average energy kind of thing.

General Pattern: The year card is from the major arcana part of the deck that generally symbolizes energy, change, growth and learning. However, the rest of the cards are all from minor arcana, which symbolizes more balanced energy and low-key day-to-day kind of advice. When most cards are minor arcana, I read that as a hint that the year will be balanced and not too stressful in the long run.

Winter: Four of Swords. This is a card of adaptability and flexibility. Not only adapting to changing situations in what you do … but also when you do it. Timing is important. Watch and wait to time things just right. Adapt your expectations from “I want it now,” to “it will come when the time is right.” Pushing your agenda may not help. Waiting, watching and going with the flow will help things succeed more easily. Stay chill with traffic and little annoyances. Things will get better eventually.

Spring: King of Wands. The energy shifts from just watching to internal action, but still not external pushing. The King of Wands represents leadership, but in this case, it is about individual leadership more than civil governance or outer group leadership. This is a time of taking personal responsibility. There is a LOT in this world we can’t control, but the one thing we have total control over is ourselves. There is a feeling of impatience. The winter may have been mild, but it can still seem long. As spring arrives, the city may notice a restless energy, chomping at the bit to spring into action, tired of all the waiting and watching energy that has been around. This is a time for mental and emotional preparation. The spring is a good time for learning new things, taking a class, and putting our mental house in order for all the summer fun to come.

Summer: Now things spring into action. The energy around the Six of Coins reminds me of all the things I love about Pittsburgh. The richness here isn’t so much physical money, but a richness of culture, personality and generosity. This energy feels like block parties and street fairs, the Three Rivers Arts Festival and home-game days when the Clemente Bridge is open to pedestrians. There is a feeling of self-esteem and tolerance … pride in your neighborhood, but working together as a city. This has a feeling of extending to the nation. After a winter of partisanship and contentiousness, even bigoted, partisan political-rhetorical energies have a chance of becoming more tolerant, even egalitarian, in the summer.

Fall: The Six of Wands classically means “peace.” The good vibes and activity continue. Just like the harvest season, plans start to happen and come to fruit. All the things everyone was chomping at the bit to do in the spring can get rolling now. Teamwork, flexibility, adaptability, cooperation remain key. Things you want to accomplish get farther now if they are done with that sense of teamwork and with pooled resources, than they would have if you’d plowed through back in the winter.

Year as a Whole: The Moon. The Moon card represents intuition, life’s natural cycles, spiritual journeys. The mental image here is a pendulum shift, a swing in the opposite direction ... it feels reactive. It feels like there is potential for a stampede of good that is a direct reaction and result of 2015’s challenges. It’s not all peace, love and flowers, but is more practical and proactive. It reminds me of The Carter Center’s motto of “Wage Peace.” If we choose it, Pittsburgh could have a year of cooperative action for practical benefit.

For individual clients, I usually give any purely intuitive impressions at this point, but for a city as a whole, there isn’t enough focus for this part to be helpful. The only mental image that remains is the one of the pendulum swinging. The word “momentum” comes to mind: success through well-timed, cooperative, widely beneficial effort. This year feels as if the energy will be on the side of cooperation, tolerance and improvement, more [so] than narrow world-views or individual selfish gain. For success, remember that “a rising tide lifts all boats.”