What’s the etiquette for eating in front of a professional dancer trying to make a living?

I had never eaten at a strip club before last month, but I’d thought about it: What percentage of guests actually order food? What are the menus like? What’s the etiquette for eating in front of a professional dancer trying to make a living?

The chef at Cheerleaders would later tell me that about 20 percent of guests order food, but the rest I’d figure out for myself.

Over a couple weeks starting in January, my girlfriend, Jes, and I visited three local clubs to get a feel for what the gentlemen’s-club food scene is like. Diligent restaurant reviews require numerous visits at different times of day and ordering from all parts of the menu, but I’m not a restaurant reviewer, so we did not do that. We visited each club once, at times convenient for our schedules, and ordered what we wanted. It’s an imperfect approach, but it’s honest. 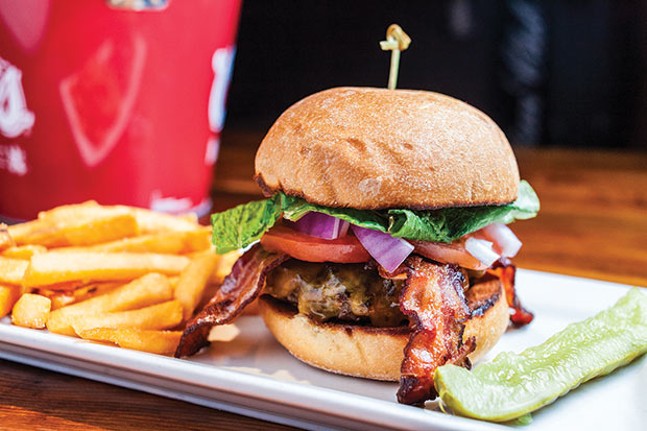 Notes: It was early for the Blush crowd, but there were some dudes in suits hanging around drinking Stella and mingling with the dancers. No one was eating. Jes thought the upbeat U2 song playing when we walked in was a weird choice to dance to. I joked that at least it wasn’t “With or Without You.” More on that later.

Though I do own a Dutch oven and tried octopus one time, I am far from a gourmand, so the sort of bar-grub typical to strip clubs is right up my alley. Fried things and sauces to dip them in. But the menu at Blush goes well beyond that, with soups, wraps, pizza and salads, plus a generous helping of innuendo. The sandwich section is called “Between Buns.” Appetizers are listed under the banner of “Mini Lap.”

Verdict: The pretzel and quesadilla were nothing more or less than you’d want or expect. I definitely felt a little weird about eating while the dancers were at work — we were in the front row and didn’t want to appear uninterested, so we kept the tips flowing and applauded excessively between bites. The burger, served with a pierogi on top, was fantastic. Perfectly cooked and well assembled, the latter of which feels important because ketchupy onions running down the cheek of an audience member must be off-putting for the dancers. It certainly would be for me.

Notes: Once again we arrived early and were among the first customers. The security guard was very friendly. No one was eating. The stage was surrounded by the bar, so guests have to crinkle up the cash and throw it to the dancers. The third dancer came out to U2’s “With or Without You” and goddamn, was I wrong. She sold the hell out of it.

A week later I emailed Cheerleaders’ chef, Floyd Wade Chambers, to see if the dancers often eat the food, and when they do. He wrote back, “Before, during & after. They love the food, our Brisket Street Tacos.” I understood that “during” meant “during the shift,” but for a moment, I imagined a young woman eating a brisket taco while swinging from the pole. There’s no way. The meat would fall out.

Verdict: I’m not a big fan of potato skins but these had a great balance of crispiness and doughy potato texture. Plus, bacon, sour cream and cheese are always dependable teammates. The wings were righteous. I felt self-aware about not getting any sauce on my face. I know the dancers didn’t care and likely can’t even see it, but anxiety is a weird thing. I used a lot of napkins. 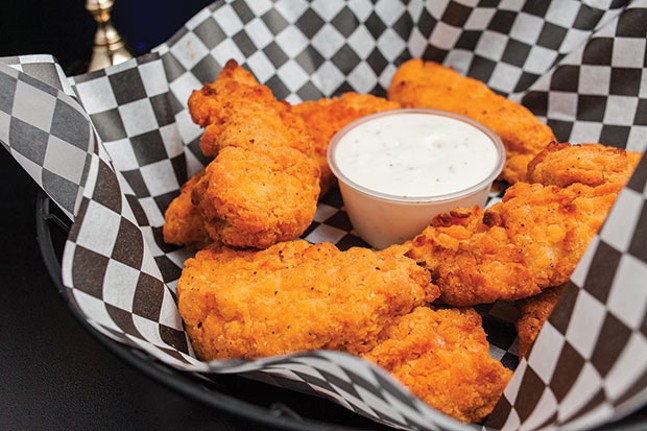 Notes: Our Lyft driver was tickled by the club’s address (“like the White House”). The Penguins game was on. We sat at the bar, which put our backs to the dancers. People were eating. The bar was nearly full with people watching the game. This menu was a bit shorter than the previous two clubs, but all the heavy hitters were there.

Verdict: The mac-and-cheese bites, served with ketchup, could have used a little spice or kick somewhere. But then again, they are deep-fried clumps of cheese and macaroni, so not much to complain about. The burger hit all the right spots. I know it’s not the most challenging dish, but this was above average for any bar. The accompanying waffle fries achieved an ideal consistency, crispy without being too greasy. With the game on and the bar situated as it was, this visit felt the most like a Friday night at a sports bar. The service was great.

Conclusion: So, it turns out strip-club food and bar food are the same things. What I did find surprising was how much the dancers on the floor support the dancers on the stage, which I thought was pretty nice. I guess it’s good for business, but it seemed pretty genuine. Overall, the visits provided some lovely date nights and a decent excuse to eat fried food on the clock. Some of our dishes were terrific, and none of them were bad; I’d eat any of them again.

A couple weeks after the last meal, I found out that other Spearmint Rhino locations serve breakfast and now I can think of nothing else.