“The number-one priority coming into that office is to straighten it out.” 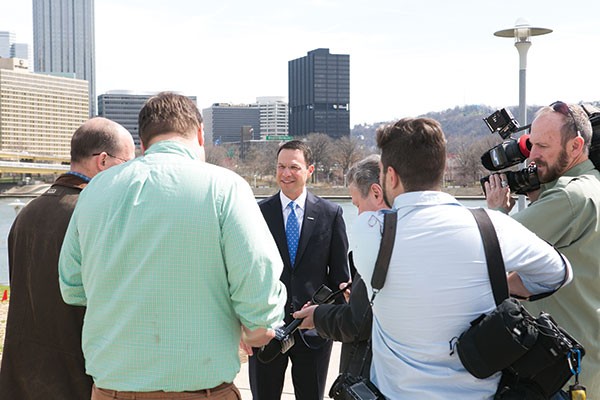 During her tenure, Pennsylvania Attorney General Kathleen Kane has made drug-trafficking and child-abuse prosecutions her priorities. The first investigation by her Mobile Street Crimes Unit resulted in the arrest of more than 100, and the seizure of approximately 35,000 packets of heroin. In her first year, her office’s Child Predator Section arrested 114 child predators, a six-fold increase over the previous year. Numbers like that for an incumbent would look pretty good on campaign literature.

But despite those triumphs, Kane isn’t running again. Last month, she announced that she wouldn’t be seeking re-election in light of nearly two years’ worth of controversy that began when Kane released emails in a statewide pornographic-email scandal, and continued when her law license was suspended by the state Supreme Court for allegedly leaking grand-jury information to a newspaper. She still faces prosecution on those charges.

Kane’s decision leaves three Democrats in the race: Northampton District Attorney John Morganelli, Montgomery County Commissioner Josh Shapiro and Allegheny County District Attorney Stephen Zappala. If one of them ultimately wins the race in November, he will serve as only the second Democrat elected to the office.

“Anytime you have a race that starts out with an incumbent facing the kind of travails and problems Kathleen Kane has, it’s going to result in an interesting battle,” says political strategist Keegan Gibson of Ceisler Media, a public-relations firm. “For Democrats, this is a race about whether their party can keep a state office that had been out of their hands for decades. The attorney general’s office has the power to impact a lot of state policies and set the tone for what the climate is in the state.”

It’s a race that has drawn attention from across the nation. President Barack Obama, who doesn’t normally weigh in on this kind of race, endorsed Shapiro earlier this month.

But locally, the race hasn’t received the attention it might have if there weren’t also a presidential election going on this year. It’s also had to compete with the state’s U.S. Senate race.

“In many ways, the attorney general can have a broader impact on people’s lives than a United States Senator,” says former Attorney General Walter Cohen. “The attorney general has much more direct hands-on work to do that affects people in the state.

That could be because a lot of voters don’t have a strong grasp of what the state’s attorney general does. And the role of the office has even become a source of debate among the candidates, whose definitions of the office also mirror their individual strengths.

But despite disagreements over the office’s role, both candidates and pundits agree that the first priority of the state’s next attorney general will be to restore the reputation of the office that has been stained during Kane’s tenure.

“The number-one priority coming into that office is to straighten it out,” says Cohen. “I personally like Kathleen Kane. I think she’s done some very good things, but there have been a lot of staffing problems there. Someone needs to come in and shape up the operation.”

The April 26 primary pits prosecutors Morganelli and Zappala against Shapiro, who serves as one of Montgomery County’s three commissioners.

With a résumé that includes serving in the state House of Representatives, Shapiro’s experience is more closely tied to the executive and legislative branches of government, something Morganelli and Zappala have criticized as a weakness. But Shapiro sees his experience as a strength, and touts his position as chairman of the Pennsylvania Commission on Crime and Delinquency as one of his qualifications for attorney general.

“Throughout my life I have always taken on the status quo and stood up for those in the community who often don’t have a voice,” says Shapiro, a lawyer by trade. “I’ve also been an executive over the third-largest county in Pennsylvania, which is four times larger than the office of attorney general, so I know how to make government work. And throughout my career I’ve always been a person rooted in integrity and good government, and I think now more than ever we need that.”

Zappala did not respond to Pittsburgh City Paper’s requests for comment for this story by press time. But in debates, both he and Morganelli have touted their prosecutorial experience as integral to the position of attorney general.

Cohen, who served just a few months as attorney general, served as first deputy attorney general for six years in the 1990s. But he disagrees that prosecution is the most important part of the job. He says the office is charged with handling consumer protection, representing all of the agencies of state government in civil litigation, handling appeals for some smaller counties, supplying agents for narcotics investigations, and occasionally handling criminal cases when a local DA has a conflict of interest.

“The office is often misrepresented. People running for the office always want to claim to be the top prosecutor — put people in jail — and that’s a small part of the whole operation. They don’t really prosecute cases,” says Cohen. “There are good trial lawyers running in this election. I’m sure they’re excellent in court, but if they become attorney general they’re not going to go into court, they’re going to be doing other things.”

Among the attorney general’s first priorities will be rebuilding the office’s reputation. Shapiro says he would restore integrity to the office by creating a code of conduct for employees in the office to follow, mandating ethics training, making the office’s spending public, banning gifts, installing a commission to examine operations in all state government offices, and hiring a chief diversity officer.

Morganelli, who sought the office previously and was defeated by Tom Corbett in 2008, says he didn’t plan on running for the office again, but was motivated by the mismanagement he saw happening there. He’s been critical of Kane’s handling of the statewide pornographic-email scandal.

“I have the most experience to go in day one and address the issues in that office,” says Morganelli. “The issues regarding the emails are ethical issues; they are not criminal-law matters. I would not have had a criminal investigation as Kane has done to the tune of $2 million — wasting taxpayer dollars — to investigate bad behavior. These emails were disgusting and reprehensible, but they were not criminal matters.”

But improving the reputation of the attorney general’s office could be out of Morganelli, Shapiro and Zappala’s reach thanks to the scandal that has mired Kane’s administration, and to the fact Kane was the only Democrat ever elected to the office.

“There’s a big cloud over Kathleen Kane and despite it looking like a Democratic year, this is a traditionally Republican office, and if the Republicans put someone forward who’s the typical law-and-order Republican, the Democrats could easily lose the office,” says Gibson, the political strategist. “But the likely Republican candidate [John Rafferty] is a state senator, so it isn’t looking like the Democrat will be running against someone like that.”

So who should Democratic voters choose in order to ensure a Democrat makes it into office? Gibson says Kane’s election in 2012 and experience during her tenure demonstrates why that question might be difficult for voters to answer.

“In 2012, Kathleen Kane ran as a prosecutor, not a politician. Voters agreed with her. Unfortunately, her relative lack of experience administering a large office worked against her because prosecution is part of the attorney general’s job, but it’s not all of it,” says Gibson. “In the general election, Zappala has a profile that has the ability to have cross-party appeal, but for Democratic-party voters, Shapiro has a record of standing up for the issues that are closer to their heart. So it’s really tough.”