Three decades in, The Reverend Horton Heat is still spreading his psychobilly gospel

“Honestly, I’d tour hell with The Rev if he asked me.” 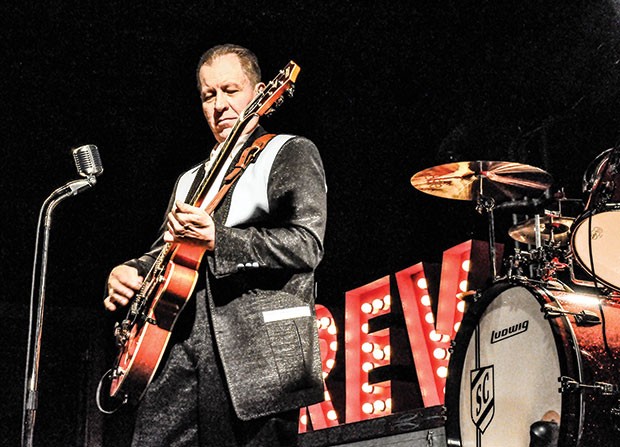 “Well,” the 57-year-old rockabilly icon says after a long pause on the other end of the phone. “No, I really don’t. On the positive side of it, I actually enjoy playing music more now than I did when I was younger. But I don’t enjoy the travel as much. When I was young it was so cool to pull up and see the New York skyline and be like, ‘Oh, cool! We’re in New York City!’ But I’m over that now.

“Playing now is so much better because I’m just focused on the music. When you’re younger it’s like, ‘We better play so we can keep this gig at Froggy Bottoms next week,’ or ‘Wow, Tony Ferguson from Interscope is here tonight, maybe we’ll get a record deal,’ but that was all BS. Now I just get up there and let it fly.”

Since the early days, when Rev. Horton Heat was just Heath’s stage name (given to him at his first solo gig without permission by club owner who’d already printed it on the flyers), the name has come to signify the Texas-based trio comprised of drummer Scott Churilla and, almost since the beginning, bassist Jimbo Wallace.

The band’s specialty is psychobilly, old-fashioned rockabilly hopped up on acid, steroids and a shot of Wild Turkey. Heath has long been regarded as one of the country’s great guitar players, and his shows still amaze and entertain packed houses nightly. And while the travel might not be in his blood anymore, he has no intention to stop touring.

“My art form is playing music,” Heath says. “That means getting out and playing music. Being in the studio almost isn’t an art form; it’s more like a commercial for your band.

“Although I have changed a little on that over the years; I now quite enjoy spending time in my own little studio.”

But the excitement still comes from touring, and six or seven years ago he started to change the focus of those shows. The band now works frequently with other artists, bringing them on tour and having them perform “five or six songs” with Heath’s band. While he still concentrates on his own music, there is more prep involved in playing another artist’s songs. Those artists have included a wide range of talents: Big Sandy, Dale Watson, El Vez, Lee Rocker, Jello Biafra and Lemmy Kilmister, to name a few.

“That’s a lot of work man,” Heath says. “Learning songs off of another artist’s record note for note takes time. I mean, if we’re going to back up Lemmy, we want it to be good.”

When The Rev. Horton Heat’s tour hits town Nov. 27 at the Rex Theater, he’ll bring Southern rockers Nashville Pussy to open, along with Unknown Hinson and Lucky Tubb, who will play with Heath’s band. Tubb is a skilled songwriter with a hony-tonk sound that drips whiskey and heartache at just the right time. As for Hinson, well, he’s what Heath describes as a “very interesting man to be around. I like him a lot.” In addition to being a skilled guitarist, Hinson’s gimmick is that of a rockabilly vampire.

“Lucky is really doing some great-sounding stuff, and Unknown is so good at that Nashville Telecaster twang, and he is quite a character. He’s also got all of these crazy little side gigs. Like one thing he does, that I just learned about, is he carves ventriloquist dummies. He’s got one he calls ‘Itty Bitty Hinson.’ He’s made 10 or 20 of those things. I gotta get one of those.”

But Heath isn’t one to call out an artist for a gimmick. Although, while that can help launch a career, he adds that sometimes an artist “can become a prisoner of their own gimmick. But listen, even if you’re a guy who swears you don’t have a gimmick and [you] go out in Converse tennis shoes and a T-shirt that reads, ‘Fuck you,’ you know you did that because you know it’s show business.”

Heath acknowledges that even Rev. Horton Heat has had its share of what he calls his “stage shtick.”

“I went through a phase where I would do a faux sermon in the middle of my show,” Heath recalls with a laugh. “I also had this thing where I would go over and stand on the upright bass. I did that for 20 years and someone said to me, ‘Don’t you think it’s time to come up with something new?’ So I stopped, and shortly after that there were five bands standing on the upright bass. But hey, we have to be entertaining so we can keep on doing it.”

One guy who wants to keep touring with Heath is Blaine Cartwright, lead singer of Nashville Pussy. He says his band has “toured with the Rev” many times and will pretty much drop anything to join the show. He says Heath’s audience is quite a change from the punk shows his band usually plays.

“Man, it’s a nice crowd,” Cartwright says. “Back in 2000 we passed up a Motorhead tour to play six months with The Rev. I’ll never burn my bridge with him. It’s a cakewalk; the crowd is great, they have money and buy merch and nobody’s throwing shit at my head like they do at a punk show when you take a little time and try to talk in between songs. Our job’s over by 9:30, the dressing rooms are much nicer. It’s just us and Jack Daniels relaxing for the rest of the night listening to The Rev.