Three Days in the Country at Kinetic Theatre Co. 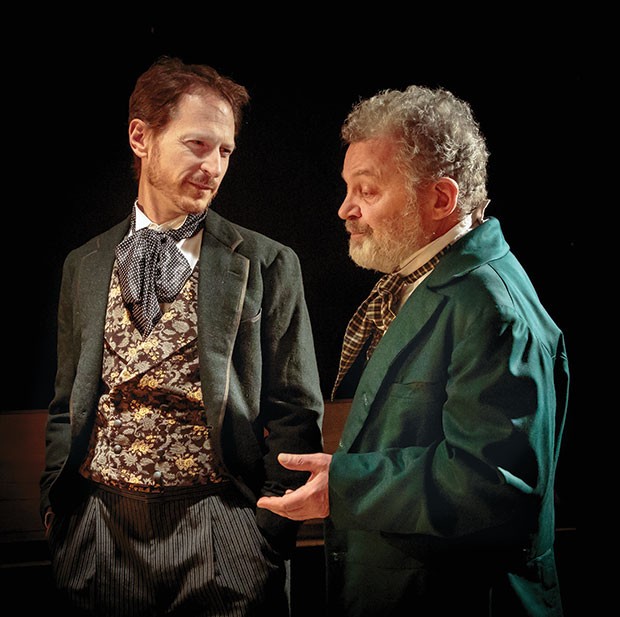 THREE DAYS IN THE COUNTRY

The “classic” in question, Ivan Turgenev’s rather turgid A Month in the Country, improves with condensation — not to mention the insight and humor of playwright Patrick Marber. Director Andrew S. Paul, Kinetic’s producing artistic director, has opted to go “in-the-round,” hemming in the characters and thus emphasizing their entrapment. The staging also pushes the audience into an intimacy that can be uncomfortable as well as discomfiting as the characters’ lives are transformed, sometimes ripped apart.

There are no minor roles. Everybody gets a chance to sparkle, none more so than Leo Marks as an old family friend, unrequited lover and urbane dandy with devastating wit. Nike Doukas enlivens the largely unlikable leading lady, a beautiful but un-self-aware siren. David Whalen credibly portrays the cluelessness and pain of her husband. The energetic Adam Haas Hunter acts well as the catalyst for much of Country’s joy and despair.

Helena Ruoti and Sam Tsoutsouvas, so memorable as passionate couples in other plays, here take a more measured, drily humorous approach to marital bliss. Ingenue Katie Wieland portrays both innocence and ferocity. Larry John Meyers gives depth and grace to an unlikely suitor. David Crawford reveals a tutor neither as timid nor as stupid as he appears. The matriarch of Pittsburgh theater, Susie McGregor-Laine, likewise commands this aristocratic if dysfunctional family. Erika Strasburg and Andrew William Miller embody the (respectively) seductive and despondent servants. CAPA seventh-grader Will Sendera capably tackles the dramatic role of neglected son.

Classics: Re-Mastered isn’t really a new concept for Kinetic, given the success of last year’s searing Dance of Death (Conor McPherson’s revision of August Strindberg), but Three Days in the Country promises more riches to come.