The event was the coalition of two progressive Jewish groups and was largely a peaceful affair. 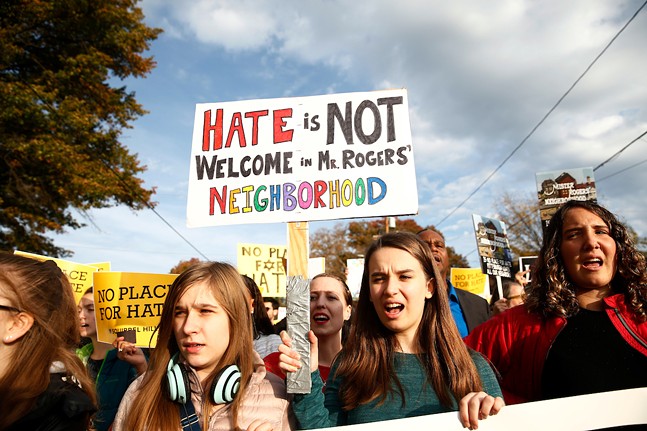 CP photo: Jared Wickerham
While President Trump was visiting, multiple groups of marchers made their way towards the Tree of Life synagogue three days after a mass shooting in Pittsburgh.
A gathering in Squirrel Hill today started as a time to mourn. The event was part of a shiva, a week-long mourning period observed by Jews, and was meant to allow people to grieve in the wake of the mass shooting that left 11 dead at the Tree of Life synagogue in Squirrel Hill.

The crowd of more than 100 sang songs and recited Jewish prayers. The event was organized by progressive Jewish group IfNotNow Pittsburgh and held at the corner of Murray Avenue and Darlington Road.

But the gathering was also political.


“We know that Trump is responsible for the violence in our city,” said Arielle Cohen of IfNotNow Pittsburgh. “We know that white nationalism and fascism have taken root.”

Cohen said that Trump’s policies of restricting immigrants and refugees from coming into the U.S. are interconnected to other things happening throughout the country. Robert Bowers, the alleged shooter, had an extensive social media history of anti-Semitic and anti-immigrant posts. Bowers posted on the Saturday of the shooting a criticism of the Hebrew Immigrant Aid Society and claimed the group was bringing “invaders in that kill our people.”

CP photo: Jared Wickerham
One of the chants also addressed Trump’s comments about having an armed guard in the synagogue could have saved the lives of those killed.

There were also many signs at the event, including some criticisms of Trump and other signs reminding people to vote.

The crowd eventually marched into the streets and met with another larger crowd that was meeting a few blocks away, organized by progressive Jewish group Bend The Arc Pittsburgh. They combined in the middle of Forbes Avenue, and totaled more than 1,000 marchers all together.


The groups combined and are now marching through the neighborhood. The combined groups numbers in the thousands and extends longer than a city block. These marchers are critical of Trump’s presence in PGH. pic.twitter.com/1Kk6Iu42eS

The crowd then continued down Shady Avenue to the corner of Northumberland Street. A police barricade was set up at the intersection. Trump was likely inside the synagogue shortly before or during the march.

CP photo: Jared Wickerham
Many in the crowd continued to sing Jewish songs. Participants at the event were from a  diverse background, including members of several progressive groups, residents of all races, and Latino and Black activists. There were even a couple of Trump supporters in the crowd.

Toward the end of the gathering, some police cars were attempting to get through the crowd. One man didn’t move out of the way, and he was apprehended by police.

After that, the crowd resumed its largely peaceful affair, eventually dispersing and thanking the Pittsburgh Police for keeping order.