Jessica Ernest is such a goddamn entertaining spectacular playing the title role in Point Park University Conservatory Theater Co.'s production of Thoroughly Modern Millie that, for a long time, it's actually difficult to notice anything else. Her exuberantly winning personality bursts like a supernova, while the ferocity of her dancing and power and beauty of her voice blast you against the back wall of the theater.

But this is a show, not a cabaret act, and great talent needs to be surrounded by similarly polished skill. Ernest (and we) are lucky that Jaron Frand, Fredi Bernstein, Justin Lonesome and Jacklyn McSpadden are beside her every step of the way. Point Park has a bumper crop of extraordinarily gifted musical-theater performers, and whatever else I may think of this show, Thoroughly Modern Millie is the perfect showcase for them, as well as for the splendid chorus and the supporting comedy performances of Sam Tanabe, Adam Soniak and Elissa DeMaria.

Of course, all this talent wouldn't matter if director Scott Wise (with choreographer Jeremy Czarniak) hadn't done yeoman's work putting this show up and getting this cast to bring their best to the stage.

On the other hand, to say that the script of Thoroughly Modern Millie is dumber than a box of hammers is an insult to both the tools and the container. The show, written by Richard Morris and Dick Scanlan, would need rewrites by Stephen Sondheim, Tennessee Williams and Eugene O'Neill just to rise to the level of merely bad.

But with Wise and Czarniak, along with music director Douglas Levine and his orchestra -- the quintessence of a "pit band" -- you'd swear to God you had stumbled on the birthplace of entertainment. It's true that not even these people could completely outrun the galloping stupidity of the book. But if the final 20 minutes begins to flag, the reservoir of goodwill built up is so great you scarcely notice.

And I've purposely used this extravagant language to set up what I really want to say. Cutting through all this glitz and glamour, the high gloss buffed by Wise and the brilliantine sheen of this brilliant cast is one performer who still manages to steal the show. Leah Fox attacks the role of Mrs. Meers with a mastery of underplaying and a laser-like comedy precision that could only have come from several past lives on the two-a-day vaudeville circuit. Fox picks the show up, tucks it neatly in her pocket and majestically walks away with it.

An extraordinary feat in a night full of same. 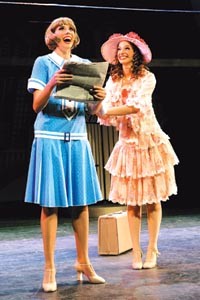