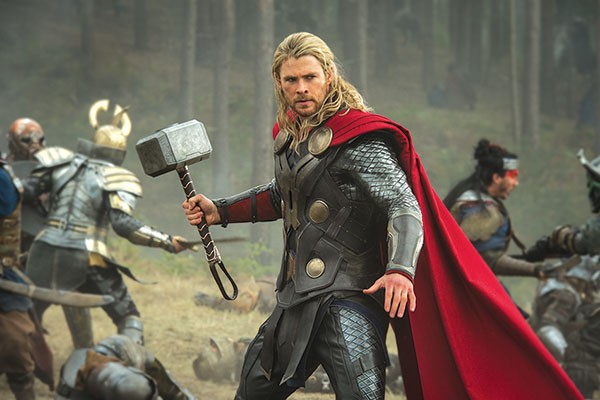 Thor: The Dark World opens with a flashback — way back — that lays out a lot of history and place-setting that was a bit confusing to the non-Marvel-ous such as myself. But as with most comics-based films, things soon shook out to the basics: A bad guy (Christopher Eccelston) is trying to get a super-weapon which is inconveniently stored inside the good guy's girlfriend, Jane (Natalie Portman). Our hero is Thor (Chris Hemsworth), aided by his giant hammer, and in a welcome turn, his tricky sibling Loki (Tom Hiddleston).

Director Alan Taylor lays out the usual warmed-over buffet: pseudo-science, lots of CGI destruction, a splash of romance, a cameo or two, and the occasional laugh. (Thor politely hanging up his hammer on a coat-rack got a huge laugh.) Millennia of conflict is resolved in a giant battle on London's South Bank, with occasional worm-hole digressions to alternate realms.

Hiddleston, once again, steals the show as Loki, while everybody else simply looks handsome and tries to keep their dignity in a comic-book movie. The always-welcome Chris O'Dowd is cast in a small role as Jane's "loser" date, but he seems more fun to have dinner with than some lunk with a hammer who's always getting in fights. In 3-D, in select theaters