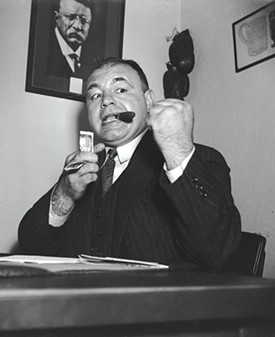 Pittsburgh Steelers running back “Fast” Willie Parker sets the team record for most rushing yards in a single game when he totals 223 yards against Cleveland.

In the 1930s, “Two-Ton” Tony Galento was a heavyweight boxer. He was the first man ever to knock down Joe Louis. By 1952, Galento was working as a professional wrestler, and on Dec. 7 had participated in a match at Speney’s Palisades, in McKeesport. The next day, state troopers were called to a turnpike gas station in Irwin, Pa. Galento and his manager, Bill Johnson, had gotten into a dispute over Galento’s pay from the night before. Galento won the argument when he knocked out Johnson’s front teeth. “Two-Ton” Tony was arrested, but the charges were dropped when Galento offered to pay $250 to get Johnson’s mug fixed.

Art Rooney sells the Pittsburgh Pirates (not yet Steelers) to Alex Thompson of Boston. Rooney then buys a majority stake in the Philadelphia Eagles. Thompson and Rooney would swap cities, however, before the start of the 1941 season.

Sure, it was just one play in a career of great plays, but the day Steelers star Jerome Bettis ran through legendary Chicago linebacker Brian Urlacher on the way to a touchdown is one worth remembering. That game also marked Bettis’ last career 100-yard rushing performance. Two months later, the Steelers won their fifth Super Bowl; “The Bus” retired shortly after.

Steelers broadcaster Myron Cope runs into crooner/actor/icon Frank Sinatra at a restaurant in Palm Springs, Calif. and asks him to join Franco’s Italian Army, a fan club for rookie Franco Harris. Sinatra agrees, shows up the next day at practice, and is inducted into the group as a one-star general.