This week in Pittsburgh: Seven Days of Arts and Entertainment

Pittsburgh Symphony Orchestra at City of Asylum's Alphabet City
Editor's note: At press time, all of these events were still scheduled, but we recommend checking websites before heading out, in light of events canceling or being postponed because of concerns over the coronavirus. If you are aware of any cancellations, please email info@pghcitypaper.com and we will continue to update this throughout the week.

The ongoing collaboration between Pittsburgh Symphony Orchestra and City of Asylum invites its musicians to perform in a space a tad more intimate than the theaters and concert halls they're used to. The series returns with the theme of "Fierce and Female" voices in the arts, featuring conductor Christine Hestwood of the PSO, renowned visiting violinist Alina Ibragimova (she's tackling Shostakovich over the weekend at Heinz Hall), and poets Kizza and Clare Welsh. 7 p.m. 40 W. North Ave., North Side. pittsburghsymphony.org

Cancer affects more than just patients, but also their families, friends, and doctors. Dr. Azra Raza, author of The First Cell: And the Human Costs of Pursuing Cancer to the Last, explores her scientific, personal, and cultural discoveries about the human cost of cancer. She will be at the Ace Hotel for The C Word: Writing about Cancer Using Scholarship & Empathy part of Creative Nonfiction’s Science as Story series. 7 p.m. 120 S. Whitfield St., East Liberty. creativenonfiction.org 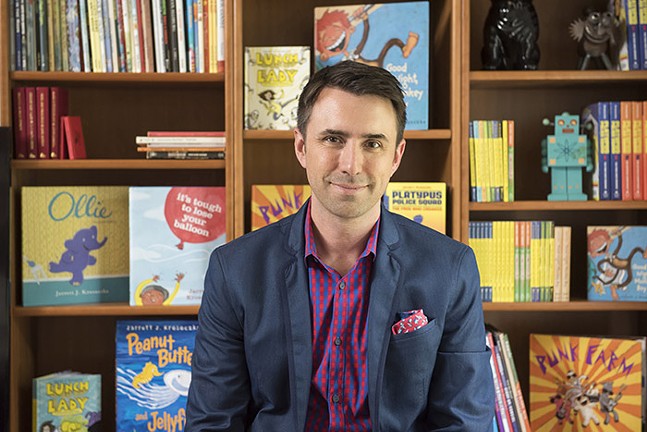 Photo: Derek Fowles
Author Jarrett J. Krosoczka
LIT
What do a jellyfish, a lunch lady, and a platypus have in common? Well for one, they’ve all been the subjects of books by children’s and young adult author Jarrett J. Krosoczka. From the Platypus Police Squad series to Hey, Kiddo, a memoir about growing up in a family with addiction, Krosoczka’s stories tackle issues, both big and small, for the whole family. He’ll appear at Carnegie Library Lecture Hall for a reading and book signing. 7 p.m. 4400 Forbes Ave., Oakland. $10 or free for CLP cardholders. pittsburghlectures.org

Photo: Matthew Murphy
The Band’s Visit at Benedum Center
STAGE
The touring production of The Band’s Visit comes to the Benedum Center, giving Pittsburgh audiences a chance to experience the offbeat hit musical in person. Based on a 2007 film, the show follows a band comprised of Egyptian police force members that gets lost on the way to a gig in Israel. After premiering in 2016, the show has won 10 Tony Awards, as well as a Grammy and Emmy. Be sure to read CP’s review for more insight on this production presented by the Pittsburgh Cultural Trust's PNC Broadway in Pittsburgh Series. 7:30 p.m. Continues through Sun., March 15. Seventh St. and Penn Ave., Downtown. $33-109. trustarts.org

FILM
Obnoxious youths partying in the woods for New Year's come face-to-face with a killer whose spirit animal is ... TERROR! That's the premise of Spirit Animal, a delightfully trashy horror comedy directed by Madeline Deering. The film is shot on VHS and the sets and costumes are minimal, but that's only because the filmmakers apparently blew the whole budget on fake blood. There is a lot of fake blood. Enjoy the future classic at Parkway Theater, presented in Smell-O-Vision. 7 p.m. 644 Broadway Ave., McKees Rocks. $5. “Spirit Animal Movie” on Facebook

Photo: Seth Rosenberg
An Evening of Queer Youth Voices at Trust Arts Education Center
LIT
See original works by LGBTQA+ youth during a special event at the Peirce Studio Theater in the Trust Arts Education Center. Presented by Dreams of Hope, An Evening of Queer Youth Voices includes staged readings of multiple short plays and performance pieces written by young LGBTQA+ people, all read by members of the theatriQ Youth Ensemble. 7:30 p.m. 807 Liberty Ave., Downtown. Pay what you can. dreamsofhope.org

MARKET
CANCELED: The Pittsburgh Electronic Music Record Fair, included in our print version of this Calendar, has been postponed.

KIDS
“This is an effort to pass on the ways to show kindness through art.” This is how Selva Priya, artist, instructor, and owner of the Priya Arts studio, describes the Youth Gallery Show opening at The Children’s Museum. Centered around the theme of kindness, it includes works showcasing the talents of over two dozen Priya Arts students ranging in age from 5-13. Show your support for the young artists during a special opening reception. 1-3 p.m. Continues through Tue., April 28. 10 Children's Way, Allegheny Square, North Side. Free with admission. pittsburghkids.org

Bad Brains' HR playing at Madams Organ in Washington, D.C. in Punk the Capital
FILM
What’s the first thing that comes to mind when you think of Washington, D.C.? If your answer is anything but Ian MacKaye, then this film has a thing or two to teach you. Punk the Capital; Building a Sound Movement explores the late '70s/early '80s punk movement of sounds and ideas that inspired an incalculable number musicians. Relive the scene with recently unearthed Super-8 films of hardcore pioneers Minor Threat and Bad Brains. (I also would have accepted “Guy Picciotto” or “Abe Lincoln.”). For more info, read CP's interview with Minor Threat/Dischord Records' Jeff Nelson from 2019. 7:30 p.m. Also 4:30 p.m. Sun., March 15. Harris Theater, 809 Liberty Ave., Downtown. $7-10. trustarts.org

FOOD
POSTPONED: The annual Empty Bowls event at Rodef Shalom Congregation, included in our print version of this Calendar, has been postponed.

LIT
CANCELED: Anne Enright at Carnegie Library Lecture Hall, included in our print version of this Calendar, has been canceled.

FOOD
You love drinking and talking about beer. Consequently, the more beer you drink the more you talk. Turns out you are the perfect attendee for Craft Beer School at Greer Cabaret Theater, where you can enjoy and discuss quality craft beers with a variety of special guests, each with expert knowledge of the evening's theme. There are also door prizes! 5:45 p.m. 655 Penn Ave., Downtown. $31.25. trustarts.org

FILM
CANCELED: The WQED Family Movie Night, included in our print version of this Calendar, has been canceled.

Acclaimed poet and translator Erin Mouré visits City of Asylum for its Art of Translation Series. The discussion, moderated by Michelle Gil-Montero, editor at Eulalia Books, will focus on two of Mouré's most recent translations: Sleepless Nights Under Capitalism: The Poems of John Wendell by Argentinian poet Juan Gelman, and The Uplands: Book of the Courel and other poems by Uxío Novoneyra of Galicia. 7 p.m. 40 W. North Ave., North Side. RSVP required. cityofasylum.org


LIT
CANCELED: PJ Piccirillo and Damian Dressick's reading at White Whale Bookstore, included in our print version of this Calendar, has been canceled.


COMEDY
Three years ago, Bryan Quinby, co-host of the podcast Street Fight Radio, explained his show to CP like this: “People want to hear people being mad at the government, because everybody’s mad at it. … And MSNBC, these liberals do it in such a dorky way.” Needless to say, not much has changed in the three years since: the self-identified "dirtbag left" still provokes thinkpieces about vulgarity and socialism (the New York Times had one on the podcast Chapo Trap House just last week) and the left/liberal/democratic/socialist divide is as bitter as ever. So it's a good time to catch up with Quinby and co-host Brett Payne in person at Club Cafe for the Street Fight Anarcho-Comedy Show. 8 p.m. 56 S. 12th St., South Side. $35. clubcafelive.com

Home workouts for the socially distant