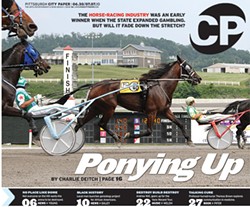 It’s funny that this week in City Paper history features a gambling story on the heels of  a Pennsylvania House of Representatives vote approving expanded gambling in the state. The new bill, if passed by the Senate, would allow online gambling as well as daily fantasy-sports betting, but stops short of allowing video-poker machines in bars, firehalls, social clubs and restaurants. That part of the bill especially was fought by casinos, who don’t want to see money taken from their properties, and by horse-racing advocates, who get money only when people play slots in casinos. On July 1, 2010, Charlie Deitch looked at how the racing business was booming at Meadows Casino. A good part of that success, however, was due to the state’s Horse Race Development Fund. Money from slots revenue was dumped into the industry to allow for breeding programs, higher race purses, and the establishment of insurance and pension funds for members of the state horsemen’s association. However, in 2009, the state started reducing the amount the industry received, and directed the money elsewhere in the state budget. This story examined not only the resurgence of the industry but also the need for it to begin attracting regular fans to make the industry self-supporting. While racing prizes increased, the amount wagered by gamblers has steadily decreased along with the fan base, and that has made for an uncertain future. As Daniel Tufano of the Pennsylvania State Horse Racing Commission put it, “If we don’t start appealing to a younger demographic, this sport is going to die through attrition.”

Writer Todd Roberts remembered the golden days of Pittsburgh boxing by talking to local fight fans and former fighters, including boxer-turned-trainer “Big” Jack Godfray. Pittsburgh’s boxing heyday, in the 1930s and ’40s, was filled with legends like Billy Conn, Teddy Yarosz, Fritzie Zivic, Billy Soose, Harry Greb and Sammy “The Clutch” Angott. After that, the city’s fight scene would close up until the 1990s, when Michael Moorer captured the heavyweight championship. But the scene would never be like it was back then. “I don’t think it will ever be like that again,” said former boxing manager Jack Henry. “Nowadays, you might have one or two good fighters coming up.”

Al Hoff and her dog, Googie, took a trip through four pet cemeteries to visit the gravesites of beloved pets, and ponder why these facilities reflected a growing trend. “Just knowing exactly where the pet is — a numbered slot in a park-like setting, and not pressed up against a busted radiator or other decaying animals in a landfill — is a comfort worth paying for,” Hoff suggested. She also appreciated pet owners who leave grave-markers and memorials that spoke to what the pets meant to their humans. “It’s a given that interred pets were loved and are missed, and such standard sentiments are duly noted,” Hoff writes. “Yet, as a visitor I am grateful to the owners who chose some unique aspect of their pets to immortalize in bronze.”

Contributing writer Matt Stroud reported on prison guards in the state system who had been fired for allegations of inmate abuse only to be put back on the job, and in some cases into positions of power, just a few years later. In one case, Stroud found out through state right-to-know requests that not only had the officers been rehired, but they were making more money than ever before. Upon rehiring, one of them had been demoted to the lowest rank, that of corrections officer, by order of a state arbitrator — only to then receive a huge promotion to administrative captain. Another officer fired as a result of the same investigation also received a promotion. The rehiring and promotions had upset other corrections officers. One even filed a complaint with the state’s Equal Opportunity Employment Commission because he was passed over for promotion. In his complaint, the officer wrote that he had received “highly acceptable employee evaluations since hire” — and that, what’s more, “I have not been terminated for misconduct.”

One of the most highly picked-up issues of CP over the years wasn’t a hard-hitting investigative story or warm, touching feature. No, it was one whose cover prominently featured two of this city’s favorite words: “jag” and “off.” Put together, of course, they’re pronounced jagoff (from the Latin Jagis-Offcis, meaning he who acts like a tremendous dick). The story inside was by then-editor Chris Potter (who loved the word with all his heart), about the Pittsburgh Post-Gazette’s decision to ban the use of the word by its writers on its pages. According to Potter, P-G executive editor David Schribman wrote in an email to his staff: “The word ‘jagoff’ has no place in the Post-Gazette. No jagoffs in the newsroom, none in the paper and none online, please. Yes, I know I didn’t grow up here; and yes, I know it doesn’t mean what some people think it means. Even so, the ruling stands. Have fun making fun of this.” Everyone did have fun making fun of it, actually. But CP had the last laugh: Potter, a frequent user of the phrase, has surely been using “jagoff” all through the P-G newsroom since he went to work there nearly two years ago. After all, you can take the boy away from the jagoffs, but you can’t take the jag.