This Week in City Paper History

In celebration of City Paper’s 25th anniversary, each week we’re looking back at the headlines, pictures and people who graced our pages over the years. 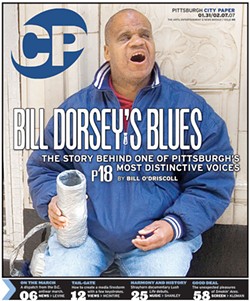 City Paper has run so many stories about so many people over the years that it would be impossible to recall them all. But if you’re an avid CP reader you undoubtedly remember “Bill Dorsey’s Blues.” It would be impossible to have a historic retrospective of this paper without including it. Everyone knew Dorsey, a former blues singer of whom the great John Lee Hooker once said, “That blind boy’s up there singing his ass off. He’s something else.” When arts editor Bill O’Driscoll spent time with him, he was living a modest life in the Hill District and using his beautiful voice to make a living singing on street corners. O’Driscoll wrote: “Dorsey professes to shun show business. He says his brief experiences with managers have gone poorly. He also treasures his independence; as a street singer, he can choose his own material — these days, he mostly sings gospel — and avoid conflicts with, say, irresponsible bandmates.” The nearly 7,000-word 2007 story is without question one of the most popular in City Paper history — and Dorsey himself is still out there singing.

Writer Sue Hirsch reports on a lecture at CMU with Mark Pauline, the founder of a performance-art group called Survival Research Laboratories of San Francisco. The controversial group was known for over-the-top art exhibits that usually involved burning and defiling the Bible in some way, like using “large sexually explicit props covered with a generous layer of requisitioned Bibles.” After “employing these props in a wide variety of Unholy Rituals, SRL machines will proceed to burn them to ashes.”

Lest anyone think that racism and racial inequality is a new thing to Pittsburgh, the issue ha been covered widely throughout this paper’s history. This week, Michele Dalton, of Wilkinsburg, said we needed to “stop pretending” that racism doesn’t exist. The solution to the problem? Dalton writes: “We have a choice. Do we work it out with our minds or do we fight it out in the streets …” Seems we’re still facing those questions.

The cover of this week’s CP asks “Is there a future in the past?” The story focused on a plan to open eight new museums in addition to the 22 already operating within city limits. Writer Michelle Fanzo asks whether there’s enough public patronage to support the new endeavors at a time when “Museums are consolidating, much like the parishes in Pittsburgh, in an effort to stay afloat.” At this time in history, the Carnegie Science Center had just opened, and The Andy Warhol Museum and what would become the Heinz History Center were in the works. And while these museums are still alive and kicking, others, like the proposed Kins House Museum in Lawrenceville, never materialized.

One of the most iconic features in CP history was The Rant, and 16 years ago this week, CP put out its first call for angry missives. Editor Andy Newman said it was “a place where you can go ballistic about any topic and nobody will so much as look at you funny.” And don’t worry: Writing down thoughts of rage did not go uncompensated, as contributors received “a gift certificate for a free massage at Downtown’s Backrubs and Bodyworks. Tell us what rubs you the wrong way, then get rubbed the right way.”

Staff writer Rich Lord wrote the first of what would be dozens of pieces on a plan to build a retail shopping center called Deer Creek Crossing, in Harmar Township, just three miles from the birthplace of environmentalist Rachel Carson. The fight would drag on for years before being scuttled in 2007.

This week’s cover story, by Marty Levine and Charlie Deitch, looked at Pittsburgh’s ties to the U.S. war machine. Levine covered protesters calling attention to the close ties between Carnegie Mellon’s National Robotics Engineering Center and the Department of Defense. Fourteen protesters chained themselves together across the facility’s entry gate with a device awesomely called a “sleeping dragon.” The complexity of the device made it extremely difficult for authorities to remove. Elsewhere, Deitch wrote about Squirrel Hill Iraq War veteran John Soltz, who had started a national organization called VoteVets to protest the escalation of the war in Iraq. “This is not a security mission,” Soltz told CP. “It’s a political one with no military solution. Our troops deserve for our president to offer them a real strategy.”