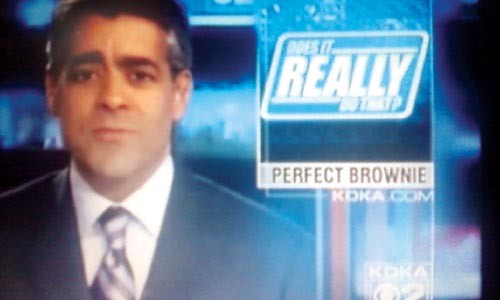 Summary: Does a pan that promises to make cookie-cutter brownies do the trick? Reporter: Yvonne Zanos, KDKA Channel 2 Airtime: 3 minutes, 43 seconds on Nov. 4  Visuals: * Campy clips from the product commercials, including a vignette in black-and-white showing a woman trying to remove brownies from a pan with a spatula, having more trouble than Moses did leading the slaves from Egypt. * An actual demonstration of the product's use. Highlights:  * When anchor Ken Rice presents the conundrum: "It seems everyone loves fresh, warm brownies, right? But when it comes time to cut those brownies, that's a different story. But there's a new product that claims to do away with crumbly, messy-looking brownies." * When Zanos opens, "Well, here's the thing, Ken: If you look at this, it looks pretty much like an ordinary brownie pan. ... So how can a regular pan promise perfect brownies?" * When Zanos introduces a note of suspense: "It's a big moment for 3-year-old Emily: She just cracked her first egg." * When she adds, "It's a first for [this woman], too: the first time this Mount Lebanon mother of two is baking brownies with both of her children. But she already knows her brownies will be perfect. How can she be so sure?" * A clip from a commercial for the pan, in which a pitchman frantically advises us, "Now, there's 'Perfect Brownie Pan'! The new non-stick way to bake, slice and serve perfect brownies! The reason? The durable non-stick coating!" Then, Zanos again asks, "But does it really do that?" (I'd love to see God torture Yvonne like this -- "So hey, Yvonne -- do you think I really did that? You know, that rising from the dead thing?") * When Zanos explains the process: "Step one: Spray all four pieces of the perfect brownie pan with non-stick cooking spray. Step two: Pour in your favorite brownie recipe. Step three: Put that divider in your pan and bake. After cooling your brownies, carefully remove the divider, and place the brownie pan on the cooling rack. Press down and voilà!" * When the long-awaited verdict arrives: "Whoa, look at that, that's perfect," mom says. And then adds, "I think that for someone that has issues with brownies not coming out straight, I think it does the job." What We Learned: The world is a cruel, dark place for crumbly, messy-looking brownies. Unanswered Question: Some parents worry about their kids not coming out straight -- who knew you could have "issues with brownies not coming out straight"? News Value: 5. This report on the brownie pan was a great way to get my mind off the election, health-care reform, shootings and taxes. So, of course, I anxiously await the imminent news that the pan's durable, non-stick coating is going to kill us.