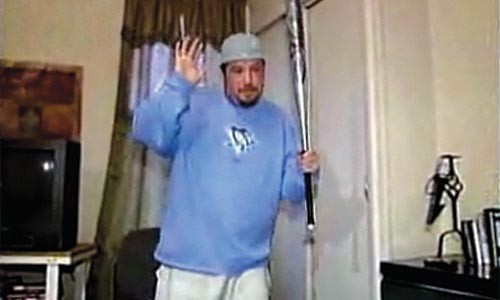 Summary: A Cranberry Township man ends up in the wrong bed after a Jay-Z concert, and subsequently winds up in jail. Reporter: Janelle Hall, WTAE Channel 4 Airtime: 2 minutes, 3 seconds on March 17 Highlights: * When Hall calls upon us to "Imagine waking up, opening your eyes, and looking next to you in bed and seeing a complete stranger. That's what Frank Fontana says happened to him this morning in his Mount Washington home, when police say a guy broke into the house, stole some money, and then snuggled up to Frank." * When Fontana shrieks, "This guy was in my bed, OK! He was in my bed! ... I felt his hand on my leg, and I like, I thought it was a friend of mine who has keys and I'm like, [pause] it didn't look like her!" He adds, "And he's like, 'Don't hit me! Don't hit me! Don't hit me!'" * When Fontana performs an animated re-enactment of the encounter, brandishing a Louisville Slugger baseball bat. * When Hall reports, "The former Seton-La Salle shortstop never took a swing, but did hold the man in his mid-20s with his baseball bat, until cops could come and cuff him, and quiz him about his night." * When Fontana says, "I asked him why he broke in here, and he said he was cold. He was singing some kinda song when they were taking him away." * When Fontana assesses, "He'll go to jail. So now he got a hotel room. He shoulda went and got a hotel down on the South Side. Now he got one on Second Avenue." * When anchor Sally Wiggin traces the journey with the aid of a map: "Well, now, here's a look at how far the suspect had to travel to get to Frank Fontana's bed. He attended the Jay-Z concert that was at Mellon Arena in Uptown Pittsburgh. According to MapQuest, he had to go nearly one-and-a-half miles and up a mountain ..." What We Learned: Jay-Z may induce drowsiness. Unanswered Question: What was Fontana's batting average? News Value: 3. Entertainment Value: 10 -- although KDKA offered the funniest quote from Fontana, who asked Mary Robb Jackson, "Why's he have to come in my bed? I mean, does it look like it's such a nice bed that he can't resist?" Jackson quipped, "The leopard sheets are pretty snazzy." Considering the break-in victim appeared to have a sense of humor, it would have been pretty hard for local stations to not have some fun with the story.