CP photo: Jared Wickerham
Pittsburgh Post-Gazette staff photographer Michael Santiago poses for a portrait in front of a Black Lives Matter mural with George Floyd painted behind him in Downtown Pittsburgh, along the Allegheny River, on Mon., June 15, 2020.
What’s happening at the Pittsburgh Post-Gazette — the uprising caused by a decision to ban two Black journalists on staff, Alexis Johnson and Michael Santiago, from covering Black Lives Matter protests — is in alignment with the uprising of Black journalists in newsrooms across America right now. In Philadelphia, Black journalists banded together to call out racist practices at the Inquirer, writing in an open letter that “it is more important for us to stand alongside those who have risen up against systemic racism and inequities and call on the Inquirer to do better.” At The New York Times, Black journalists and their allies all lambasted the decision to run an op-ed encouraging siccing the military on protesters saying it endangered both their personal and professional lives.

What we’re seeing here is the messy but necessary outcome of diversity doing what it’s supposed to do in newsrooms: Challenge norms, “values,” and traditions established and protected at all costs by white journalists. Most of those norms were set at a time when people of color had no voice, no power, and no representation on the mastheads. And these kinds of challenges are the undesired outcome that white media standard-bearers have historically dreaded of diversity. Which perhaps is why diversity has been so effectively held at bay: White standard-bearers who have been building up the media industry in their own image have been historically uninterested in allowing people of color to infuse their own values, experiences, and beliefs — or at least, they have been unwilling to wrangle with them face-to-face.

That unwillingness to engage with diversity has not served journalism well — especially local journalism, where no newsroom in America reflects the racial demographics of the cities they cover. It certainly hasn’t in Pittsburgh, not at the Post-Gazette where layoffs and buyouts have become quotidian. Just this weekend, Santiago, one of the few Black people on the Post-Gazette’s staff — a photojournalist who was teargassed and almost arrested while shooting early protests — decided to take the buyout and leave the paper rather than struggle with how it has mistreated him. Diversity can and should be remedial in this regard, but the Post-Gazette’s management has been doing it all wrong, and to its own detriment.

Santiago and Johnson were banned from protest coverage after Johnson sent a tweet on May 31 suggesting that the way Black Lives Matter protests are viewed is punitively different than how Kenny Chesney concerts are viewed. Post-Gazette executive editor Keith Burris said that the decision to bench Johnson and Santiago had nothing to do with race, but was instead done “purely for journalistic reasons” and for “upholding professional standards in journalism.” However, the Pittsburgh chapter of the Society of Professional Journalists has already deflated Burris’ “standards” defense.

But the real question is who gets to decide the interpretation of the standards to begin with, when they should apply, and when they can be skipped. Burris and a handful of Post-Gazette editors read Johnson’s tweet one way, and decided it ran afoul of the standards. Over 80 Post-Gazette reporters — along with the local and national Newspaper Guild, the Pittsburgh chapter of the SPJ, and scores of other journalists nationally — read the tweet differently.

The Post-Gazette editors decided that their tiny minority opinion alone was right, and still stand by this decision. To decide that Johnson’s, and everyone else’s, interpretation of these events are invalid, and then argue that decision had nothing to do with racism is an argument in bad faith. The decision about what she, a Black journalist, meant by her tweet was decided for her by white editors. The grievance filed by the Newspaper Guild on her behalf states that she and Santiago were given no due process. A white reporter who also tweeted about the protests was not immediately taken off of protest coverage.

Race matters in this decision because Burris’ lens on Johnson’s tweet came through an aperture of power and privilege. By silencing Johnson and Santiago, he narrowed the framing of the events to that of his own while limiting the kind of light that could bring further illumination to the topic. This is antithetical to the principles of diversity.

Meanwhile, Johnson’s viewpoint — as an African-American woman with a master’s degree in journalism, and as the daughter of a retired state trooper and a retired probation officer — should have been trusted. That’s what diversity means: to value and trust the viewpoint of someone who is different than you.

It is not controversial nor new to recognize that race plays a role in what newspapers cover and how, and that’s exactly what Johnson’s tweet illustrated. The aftermath of Chesney’s concerts has led to millions of dollars in damages, people getting arrested, injured, and hospitalized. Those concerts are almost exclusively white venues, and they happen regularly. When he’s on tour, his riots are weekly. But it’s only the riots that happen amidst protests against police violence that are scolded as affronts to American principles. Let the record show that the Post-Gazette’s June 2 editorial had exponentially more words devoted to chastising the way protesters responded than it did words on the brutal act of police violence against George Floyd that they were protesting. These happen to be protests that overwhelmingly involve Black people and the message that Black Lives Matter. Violence at these protests are far more seldom than at Chesney concerts in an off year — though every day the police give Black people reasons to riot more.

Anyone processing this moment through a critical lens could see that this is what Johnson’s tweet was projecting. She was telling a truth about how media covers race. Burris claims that her telling that truth was a deal-breaker for reporting on protests objectively. But Johnson’s tweet was an ipso facto exhibit of how white riots get covered un-objectively, though as the standard from which we can’t deviate. That’s the race-based standard that is being applied here.
click to enlarge 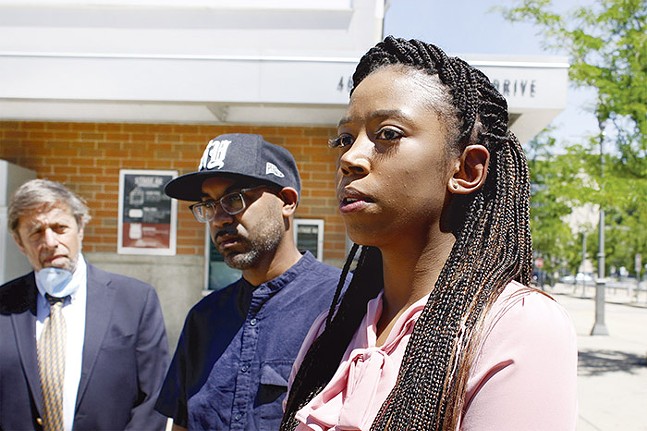 CP photo: Julia Maruca
Pittsburgh Post-Gazette staff photographer Michael Santiago and reporter Alexis Johnson at a Newspaper Guild of Pittsburgh press conference on Mon., June 8.
One of diversity’s most critical missions, especially for Black people, has to be to reconstruct standards that punish those who dare to challenge the wisdom of white men in power. Without that function, any company that hires people who are not white in the name of diversity is only performing a feckless, staged diversity — a parody of diversity.

As more African Americans and people of color join newsrooms, the power of diversity has proven productive and contagious: Over 80 employees at the Post-Gazette put their livelihoods and journalistic reputations on the line to support Alexis Johnson and Michael Santiago, most of them white.

Some may have been doing this out of solidarity, as allies, recognizing a racial injustice and speaking out about it. Perhaps they’ve seen — as I have living here roughly 10 years cumulatively as a Black journalist — one too many Black journalists shuffled in and out of their newsrooms, always leaving under duress from an unpleasant relationship with their outlet or an unwelcoming environment in the city, or both. The white reporters who stand with Johnson want to change the landscape so that this is no longer the rule.

Others’ motivations might be more selfish: They believe that if management can silence other reporters over a tweet today, then the same could happen to them tomorrow. The Post-Gazette editors’ response after Johnson’s co-workers tweeted in her support — to ban all of them from protest coverage — would have proved their hunches correct.

Either motivation is OK, but if the latter, then it is only another testament to how diversity can be a benefit even to those who aren’t necessarily driven to defend it. What’s left unresolved is the chilling effect left not just on Johnson and Santiago, but across the entire local media landscape. Many journalists in Pittsburgh are concerned if not troubled about what might happen to their jobs if they express themselves during times of extreme racial injustice. For some white journalists, that may be an uncomfortable, but mostly doable thing they can pull off without real consequence. For journalists who are not white, it is not an exaggeration that it can feel like your soul is suffering a stroke. Santiago told me that he has been struggling with depression over this.

In the 1990s, newspapers were threatened by the World Wide Web, the unleashing of which meant that newspapers would no longer be the sole non-academic arbiters of what information and version of events would be available to the public. The advent of social media in the 2000s further threatened newspapers for the same reason. Both the internet and social media have amplified diverse voices in ways that now are also rightfully threatening majority-white media establishments.

Meanwhile, newspapers like the Post-Gazette have been buying out and laying off journalists left and right, while too frequently dying off in the process. It is possible some of that bleeding would have been staunched had they been earlier adopters and better harnessers of the energy of the internet and social media. Burris confessed in his open letter that he “underestimated the power of social media” — in 2020. Meanwhile, they also are underestimating the power of diversity. And, how it could help save their newspaper, if not the industry. Perhaps, that would change if we had some different people at the deciding table.
Brentin Mock is a Pittsburgh-based editor and writer for CityLab.com and a Pittsburgh City Paper alum.