By Marley Parish and Jaxon White 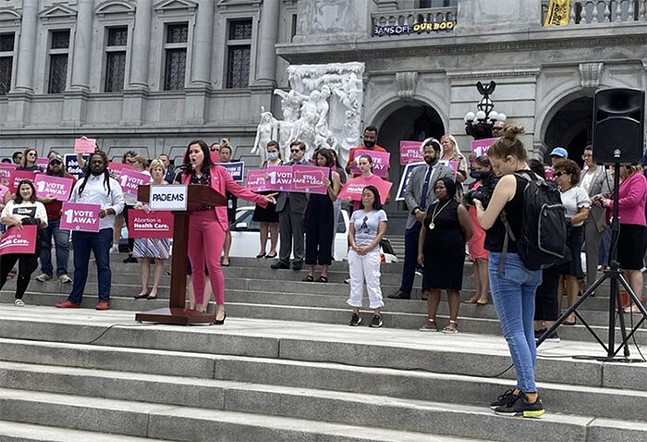 The Republican-controlled Senate on Friday approved a five-part proposed amendment package, which includes language that would amend the Pennsylvania Constitution to state that it does not guarantee any rights to abortion or public funding for abortions.

The upper chamber voted 28-22 to send the proposal, Senate Bill 106, to the House of Representatives for consideration.

Late Thursday night, the Senate Rules Committee voted along party lines to advance the bill — including amendment language for voter identification requirements, a system for election audits, a provision to allow gubernatorial candidates to choose their running mate, and a measure that lets lawmakers disapprove regulations without facing a gubernatorial veto — and table a series of amendments proposed by Democrats.

Language for the abortion-related amendment came from a proposal introduced by Sen. Judy Ward (R-Blair) last year. Democrats have said the proposed amendment would impose an abortion ban across the commonwealth.

“Abortion bans are dangerous for all women,” Sen. Carolyn Comitta (D-Chester) said Friday while speaking on the Senate floor.

Ward, however, has said the proposal would give the General Assembly and voters — who vote on ballot questions — power over abortion law and added that existing law would remain in place.

“The people of Pennsylvania should have a say in issues they feel strongly about,” Ward said. “It is the Legislature that is tasked with making the law, not the judicial branch.”

While speaking on the Senate floor in 2017 about legislation restricting abortion, Baker detailed how her daughter, Allison, was delivered stillborn after being diagnosed with a rare chromosome abnormality.

“Yes, my life was forever changed by this experience,” Baker said at the time. “My son never got to be the big brother he wished for. My husband and I never had more children. And I lost my father less than two weeks after our daughter’s funeral, which my mother always believed was from a broken heart for our loss.”

Laughlin cited promises made to his constituents when he campaigned in 2016 for his opposition to the bill.

“Today, I’m keeping my word about reproductive rights, and I’m also voting for a budget that has no tax increases,” Laughlin told the Capital-Star. “I’ve made it extremely clear on the issue of abortion. I want to leave our law as it stands — no more or less restrictive.”

Sen. Lisa Boscola (D-Northampton) was the only Democrat to support the proposal.

A governor cannot veto a constitutional amendment, which must pass the Legislature in two consecutive sessions and be publicly advertised before reaching voters, who have the final say on the proposal. This proposal is in its first legislative session, and the state’s existing abortion law remains unchanged.

The proposed constitutional amendments would need to pass again the next legislative session — as early as January 2023 — to appear on the 2023 primary election ballot.

Republicans faced backlash from their Democratic colleagues for pushing the proposal through committee late Thursday night and criticism for using the constitutional amendment process to “circumvent” the legislative process.

“It is meant to be an exception and not the rule,” Sen. Maria Collett (D-Montgomery) said of the “sacred” system used to amend the constitution.

Sen. Vincent Hughes (D-Philadelphia) said Thursday night — while lawmakers on the Senate Rules Committee debated the legislation — that reproductive rights advocates were already contacting him about coming to the Capitol to protest the abortion-related amendment.

“There will be a reaction,” Sen. Steve Santarsiero (D-Bucks) said ahead of Friday’s vote.

Reproductive rights advocates have taken their protest inside the Capitol and outside the door to the House floor. @HelenGymAtLarge is here. pic.twitter.com/SOiS7klDBp

And by the time lawmakers approved the bill, dozens of people had gathered for a rally on the Capitol steps calling for reproductive rights.

With the House and Senate still in session on Friday, some lawmakers stepped away to join the crowd.

“This is bullshit,” Rep. Emily Kinkead (D-Allegheny) said. “And I was tone-shamed by my opponent for saying fuck the last time, but this is fucking bullshit.”

She said that there are many other issues that legislators could be attending to but “denying birthing people their rights,” must be more important to Republicans.

Rep. Elizabeth Fiedler (D-Philadelphia) said that she asked her Republican colleagues in one-on-one conversations if they believe that the decision for her to carry a child and birth a child should be theirs to make.

“They did not like the question,” she told the crowd. “They said that question makes me uncomfortable.”

“And so I would say to our Republican colleagues: If you can’t answer that simple question one-on-one, how can you be here today trying to make that decision for all birthing people across the commonwealth?”

Fiedler said that Democrats will continue to fight for the constitutional right to abortion no matter what decision comes from the amendment package.

“I would just say to every person out there who is pregnant, or has been pregnant, or could one day become pregnant, that we’re here with you. We’re standing in solidarity with you, and we will not give up,” Fiedler said.

Advocates, including Philadelphia City Councilmember Helen Gym, later took their protest inside the Capitol and outside the House chamber, leading chants that could be heard from the Senate floor, Democratic Sens. Collett, Katie Muth, and Amanda Cappelletti — who briefly participated — said.