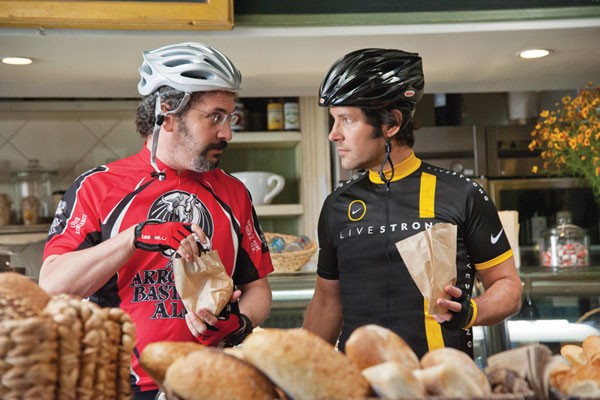 This Is 40 is a comedy, and while there are a few laughs and some funny bit players, mostly I was thinking: This is the longest not-very-funny film I've ever sat through.

Seriously, writer-director Judd Apatow's film is two hours and 15 minutes, during which not much even happens: A married couple turning 40 (Paul Rudd, Leslie Mann) have mild freak-outs about aging, parenting, parents, marriage, work and money.

But good comedy comes from pain, and it's hard to care about the mid-life crisis of perfectly toned people, who barely seem to work, have a palatial home and, despite lip-service, don't really seem to care about money. (Twice, the sum of $12,000 is shrugged off.) This may be 40 for the Apatows (four of whom — his wife, two kids and an iPad — star in this film) but universality isn't 40's strong suit.

Apatow's self-indulgent comic spin on the familiar travails of domesticity falls flat, trading funny banter and likable characters for whining and squabbling dressed up in lazy, self-conscious dialogue. (Besides, Louis C.K. is already killing it on the small screen, with his funny but heartfelt examinations of being a 40-something parent, straddling hip and dead.)

The film's biggest laugh came when the end-credits blooper reel offered the unexpurgated scene-stealer, Melissa McCarthy. No disrespect to her take-no-prisoners rant, but shouldn't we be laughing more during the film and not when it's over?