When Iron Mike’s got something to say, he doesn’t care how completely stupid it makes him look 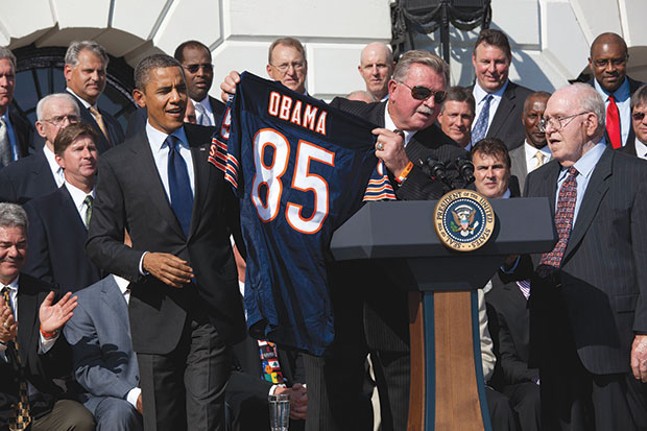 Mike Ditka didn’t think Barack Obama was disgusting when he joined him at the White House.

Mike Ditka is an old-school type of guy. He’s big and bold and not afraid to say what’s on his mind. He doesn’t like political correctness or any of the civility and respect for others that it brings. When old Iron Mike’s got something to say, he says it and he doesn’t care who it offends.

Or, apparently, how completely stupid it makes him look.

Ditka, a native of Aliquippa and arguably one of the greatest tight ends in NFL history, shoved his foot in his big mustachioed mouth recently when NFL radio host Jim Gray asked him about the anthem protests by NFL players. Starting last season with quarterback Colin Kaepernick, players began kneeling to protest racial injustice.

Ditka disagrees with the protest and, in fact, questioned what all of the hullabaloo was about. All is well in the good ol’ U.S.A.

“All of a sudden it’s become a big deal now, about oppression,” Ditka said on Westwood One radio. “There has been no oppression in the last 100 years that I know of. Now maybe I’m not watching as carefully as other people.”

He then followed that up with the old cranky-white-bastard retort: “If you don’t respect our country, then you shouldn’t be in this country playing football. Go to another country and play football. If you had to go somewhere else and try to play the sport, you wouldn’t have a job. … If you don’t respect this flag and this country, then you don’t know what this is all about. I would say, adios.”

Also, Ditka, a huge fan of presidents Reagan and Trump both, is the guy who once said that President Obama’s leadership skills were “disgusting.” It’s also not the first time that Ditka sounded off about anthem protesters. In September, he called protesting players “malcontents,” and last year, he tore into Kaepernick, saying he had no respect for the quarterback.

After Ditka’s most recent comments blew up in his face, he kind of apologized saying, “I have absolutely seen oppression in society in the last 100 years. The interview was about the NFL and related issues. That’s where my head was at.”

I think anyone, even a close-minded blockhead like Ditka, knew how the statement would be taken. Plus, it’s not the first time he’s said something like that. In fact, in the same 2016 interview about Kaepernick, for Dallas’ 105.3 The Fan, Ditka said, “I don’t see all the atrocities going on in this country that people say are going on. I see opportunities if people want to look for opportunities. If they don’t want to look for ’em, then you can find problems with anything.”

So a year before he made and apologized for the “no oppression” statement, he basically said the same thing. Other Ditka greatest hits, according to a great column from Tim Baffoe at CBSChicago.com, included saying that former Baltimore Raven and domestic abuser Ray Rice was “not a bad guy, but he made a bad mistake. Hey, two lives are ruined. These two lives are ruined. His earning power is destroyed. That’s an important thing.”

Western Pa. already has a reputation for being a fairly racist place to put down roots. Having a nincompoop like Ditka sounding off on race relations makes us look even worse. That someone pays this man to spew his moronic opinions is a pretty sickening realization. We’ve always been a region to stand by our local celebrities warts and all, but guys like Ditka just need to shut up. The last voice this country needs to hear is another old white guy who doesn’t believe in oppression and discrimination because he’s never personally experienced it. We hear that opinion from folks enough around here — in line at the grocery store, at the bar, and at Thanksgiving dinner. Let’s spare the rest of America the same annoyance.

Before you boo NFL anthem protesters, get a grip on what you are protesting