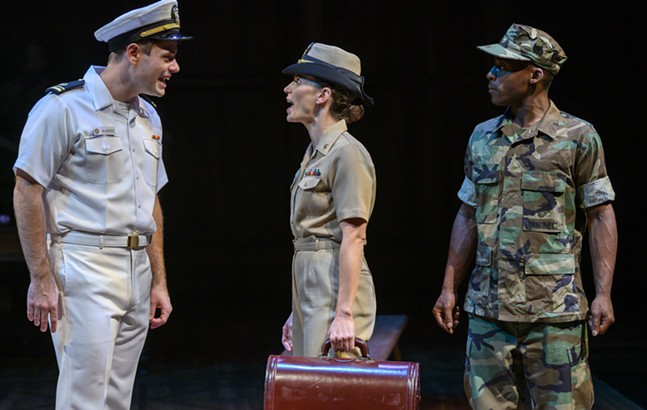 Photo: Michael Henninger
Doug Harris, Alison Weisgall, and Malic Williams in A Few Good Men
Courtroom murder trials are inherently tense, but made even more so when the case involves marines who have sworn to live up to a certain code of ethics and honor. These issues are tackled in Aaron Sorkin’s 1989 play (and 1992 movie) A Few Good Men, which runs at the Pittsburgh Public Theater through Sun., Oct. 13.

The play opens in Guantanamo Bay where two young marines, Private First-Class Louden Downey and Lance Corporal Harold Dawson, are charged with the murder of a fellow marine under mysterious circumstances. The lawyer assigned to their case, Daniel Kaffee, cares more about playing on his work softball team than fighting tough battles in the courtroom. Then, another marine lawyer, Joanne Galloway, shows up who's convinced that there’s more to the case than what they’ve been told. She is adamant that the case involves a misguided “Code Red,” an unofficial hazing ritual. Colonel Nathan Jessep, the commanding officer stationed at Guantanamo Bay, insists that Code Reds were strictly forbidden and that Private William Santiago, the murder victim, was a weak and substandard marine.

As the legal team starts to dig further into the story, they learn that more goes on in Guantanamo Bay than they’ve been told about — not only do high ranking officers know about Code Reds, they sometimes order them, maybe even in the case of Santiago. Kaffee, Galloway, and their colleague Sam Weinberg find themselves in a moral dilemma, questioning who and what they believe, and their duties as lawyers and marines.

The play feels like a bit of an odd fit for a theater company in 2019, as it’s a courtroom drama about violence between the marines stationed in Guantanamo Bay. We know now that far more horrific things have gone on in Guantanamo Bay that have nothing to do with inter-marine politics. It’s weird to watch a play about the U.S. military in 1989 that hasn’t been at all updated to reflect the current state of the military and doesn’t acknowledge the 30-year gap, or that some of Sorkin's condescending monologues about morals in the military don't hold up in present day. The year is barely referenced, so it's almost disguised as a contemporary play.

Script and plot aside, the actors are mostly well-cast for their roles and bring out the characters’ strengths. As Kaffee, Doug Harris has all the boyish charm and cockiness needed to play a smart, but overly confident young lawyer. Alison Weisgall brings the intensity and teacher’s pet energy to Joanne (although, again, this is Sorkin, so there’s only one woman and her main personality trait is that she’s a nag.) As Jessep, Burke Moses especially stands out for his fiery and commanding delivery.

It’s hard to watch a play like A Few Good Men and pretend that it or its audience is apolitical towards the military, but the strong performances and intrigue surrounding the murder are enough to make it a compelling watch.