They're Off: Large field of mayoral hopefuls meet in first debate 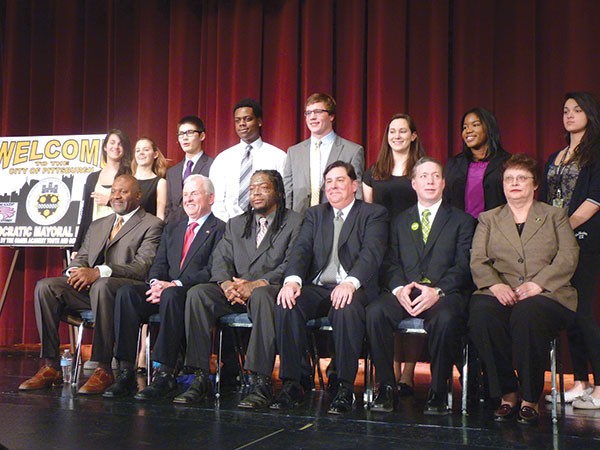 By deciding not to seek re-election amid a swirl of controversy, Mayor Luke Ravenstahl has settled some questions about the city's future. But he also raised a new one:

"Who are all these people?"

The first post-Ravenstahl debate — a March 17 gathering at East Liberty's Pittsburgh Obama 6-12 School — featured all six Democrats, and a crowd of more than 200. But the discussion offered few strong points of contrast. The format limited responses to 60 or 90 seconds, without rebuttal, and the candidates refrained from challenging each other.

Still, some early trends are starting to emerge.

Ravenstahl: Not gone, but already forgotten?

Judging from crime statistics and local headlines, wrongdoing in Pittsburgh seems to be on the decline everywhere except City Hall. Yet Ravenstahl's departure will likely de-emphasize ethics questions.

At the debate, candidates were asked to demonstrate their reformist bona fides. Harris, for one, touted her North Side neighborhood-activist roots: "I've never been sold, and I never will be." Peduto, Ravenstahl's sharpest critic on council, boasted about opposing the mayor on a slew of issues; Lamb touted his office's "Open Book Pittsburgh," a website that tracks city contracts alongside campaign contributions. ("Guess what? There's overlap," Lamb said.) Wheatley groused about a lack of transparency in city contracting procedures.

But there was hardly any discussion about the ongoing problems in the city's police bureau, which have dominated headlines this year. Instead, candidates were asked about their own public safety plans ... and most of them focused on putting more police on the streets. Peduto stressed "decentralizing" the bureau, transferring more decision-making to individual zone commanders. Lamb pledged to turn over more deskwork to civilians, freeing police to hit the streets. Only Richardson suggested there could be too much policing: "More cops on the streets means more money out of our pockets," the self-described community activist said.

Some hot-button issues are things candidates can't do much about.

While concerns about the city's pension fund, for example, went ignored, candidates were united in arguing that large nonprofits like UPMC weren't contributing enough in taxes. But tax law is set by the state, and it wasn't clear how calls for "accountability" from nonprofits — or for-profit companies who paid workers too little — would translate into action. (Although Lamb, for one, routinely cites his advocacy of a "community paramedic" program, in which UPMC and Highmark are training city paramedics to visit chronically ill city residents during slow periods.)

Wagner especially raised issues — like state education-funding formulas — on which Harrisburg sets the policy. He also touted his role championing a 1993 citywide assault-weapons ban — a measure he boasted was "20 years ahead of the issue" — though state law blocked the law from going into effect.

Peduto, for his part, scored the debate's biggest applause line by calling for a "21st century transit system." Transit is a county operation, but Peduto touted his close political ties with county executive Rich Fitzgerald: "We need a mayor who works with our county executive."

Peduto and Wagner are the early front-runners ...

A poll by fledgling outfit Keystone Analytics shows 30 percent of voters backing Peduto, with Wagner at 20 percent and other candidates lagging. Peduto also appears to have the most extensive campaign apparatus: His backers were the most vocal and visible during the March 17 debate, and he has racked up endorsements from local officials and unions.

Still, Lamb has the coveted party endorsement — he was the sole contender once Ravenstahl withdrew — and Wagner has the ingredients for a ready-mix campaign. Having served eight years as the state's auditor general, he can leverage statewide support, and a family that includes County Controller Chelsa Wagner, his niece, and brother Pete Wagner, chair of the South Hills' vote-rich 19th ward.

Yet Wagner is no shoo-in. Of the $209,475 in campaign contributions he raised in 2012, only one contribution came from an individual living in Pittsburgh. And during the 2010 gubernatorial primary, he trailed eventual Democratic nominee Dan Onorato almost everywhere in town outside the South Hills.

... But anything can happen

That Keystone Analytics poll also showed 22 percent of voters undecided. And with the exception of Richardson, this year's candidates too have familiar names and built-in constituency. Peduto is the lone East Ender, Harris the only North Sider and the lone female. Wheatley and Richardson are both black.

A candidate with a sufficiently active base need not be popular citywide to win. In some ways, the 2013 race is shaping as a reprise of the 1989 primary, which featured five well-known Democrats. That year, incumbent Sophie Masloff was able to win with just 28 percent of the vote, beating a field that included the city and county controllers, civil-rights champion Byrd Brown and future mayor Tom Murphy.

What's more, in November the Democratic nominee will likely face Republican Josh Wander. Wander has some name recognition of his own after appearing on a reality-TV show about "preppers" who stock supplies for future catastrophes. Voters might want to follow his example: It could be a long campaign.