It's often said that other people's dreams are boring. Nightmares are too symbolic. Daydreams are too plain. Doubly dull are hallucinations, mirages and "weird thoughts." After all, they're just figments, inside jokes that aren't funny. You had a flying dream? Your teeth fell out? So what?

But some folks are gifted dreamers, and the details of their subconscious change human history. From their boundless imaginations came surrealism, Harry Potter and, more recently, These Strange Adventures: The Art of Maggie Taylor, now at the Silver Eye Center for Photography.

Taylor is not a photographer in the traditional sense. She uses photographs, salvaged from odd collections, then scans them and digitally quilts them together. This may seem like a quaint homework assignment for a Photoshop class, but it's much more: Taylor may spend months on a single image, layering the bits of digital scrap until they form a unified portrait. She spends untold hours staring at her computer screen, splicing and rearranging. The precision of her work requires inhuman patience.

Yet Taylor is incredibly prolific. Most headlining shows at Silver Eye fill only two rooms, leaving the rear vestibule for smaller exhibits. But Taylor uses every inch of the gallery, decking the white walls with 40 of her uncanny collages. All the pictures are the same dimensions -- and are uniformly square -- but each is a window into a brain-bending dreamscape. Animals merge with people, people blend into plants, and objects dance around the backdrop like giddy sidekicks. If Edward Gorey and René Magritte ever invented a universe together, it might look like Taylor's.

The most original (and engaging) pieces are in the back room. Here we find "The Patient Gardener," a portrait of a nude woman wrapped in a sarong of ivy. But the ivy is overgrown, covering her face as well. The woman poses elegantly, but her identity is obscured. Similar to "Gardener" is "Subject to Change," which depicts a stoic man wearing a coat of fallen leaves. His arms are folded, the back of his head has sprouted a dormant tree, and his beard extends like a spearhead from his chin.

Both figures inhabit a land of gray mist, and time is uncertain. Both characters seem comfortable, even resigned, in their damp darkness. The same goes for "Girl in a Bee Dress," whose title says it all.

Strange Adventures will mostly appeal to Lewis Carroll fans, because the first two rooms are dedicated to Taylor's illustrations for a pictorial Alice in Wonderland. (Silver Eye sells the book.) These images are familiar: A cake says, "Eat Me," Alice falls down a rabbit-hole, etc. You'll see the King and Queen of Hearts, and you'll see croquet played with pelicans. Creepiest of all, you'll see Taylor's version of the Cheshire Cat, which is a real feline with human teeth grafted to its face.

In a way, it's too bad that Taylor's more original works must play second fiddle. Alice in Wonderland is a beloved classic, and it's no wonder that Silver Eye's PR focuses on this familiar world. And yes, this series is wildly imaginative -- Alice, as a figure, is never portrayed by the same girl. She's a child or teen-ager, skinny or plump, pretty or plain. When we see the Caterpillar, he's not at all what we expect: a Victorian weightlifter, mustached and proper, whose body just happens to blend into a colorful larva.

But everybody knows Alice. No matter how strange the interpretation, magical food and talking animals are just part of our cultural vocabulary, as ordinary as robot-monsters and Scooby Snacks. Taylor is freer in the back room, where no children's novel constrains her vision. "Sleep Walking" shows a young man in an old baseball uniform. In his arms, he cuddles an enormous fish. Now that's a dream. 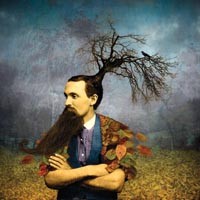 Out of his tree: Maggie Taylor's "Subject to Change"