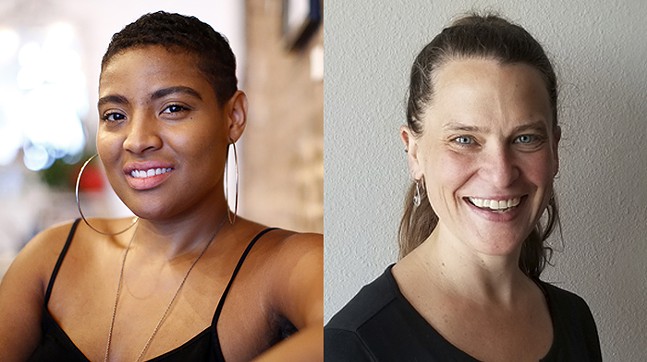 Discussions about what should happen with the Christopher “Let’s Get Lost” Columbus monument here in Pittsburgh tend to center around the thoughts and feelings of white Americans and Italian-Americans, specifically. This desire to center whiteness, turning terrorists into heroes and slave owners into “founding fathers,” contributes to the problem of white hero worship.

The voices of the Indigenous peoples of the region should be front and center in this discussion. It was their lands, languages, and lives that were decimated through the actions that began with Columbus and continues to this day through the ramifications of this white settler violence.

Below, two Indigenous women in Pittsburgh share their thoughts on what they believe should happen with the Columbus statue.

[It’s] just as present as the air, it exists but no one sees it … out of sight, out of mind. There’s not many resources, events, or well-rounded information on Indigenous people as is, let alone in Pittsburgh. We exist. We live modern lives among everyone else. Our history is worthy of celebration and healing. Erasure is very real. If you don’t interact healthily with the people of this land, how dare you even say you are a “citizen?” How can you even have the audacity to utter that?

One thing I would like to see is a more accurate depiction of us using celebratory experiences, well-rounded events, and programs that financially and resourcefully benefit the local Indigenous people and those who live here. Truly promote our vast history while being mindful of creating a safe space. Unfortunately, many have dangerous views of indigenous people that dehumanize us.

Should the Columbus statue be removed from public view?

He needed to be removed in 1492. His “legacy” led to the demolishment of thousands of languages, murder of children, forests, clean water, historical legacy … I could go on and on. Columbus is a fraud, a genocidal bigot. The fact that people still have monuments of this person is a testament to how much the story is valued more than the truth. The thing about truth is that it will always fall on you. The more lies you build, the harder the fall. If the USA wants to maintain this image before upholding the truth, we are in for one heck of a ride.

I moved to Pittsburgh for a doctoral program. Pittsburgh has a number of markers of a Native past, which I think are supposed to feel celebratory; but, for me, are really problematic. The Seneca Chief Guyasuta has become a kind of Pittsburgh legend, and I have heard all kinds of different tales about him. I attended Sharpsburg's Guyasuta Days for about 12 minutes. When the people of Sharpsburg “crown” their designated Great Chief and Princess in the worst kind of satire ... Lou Costanzo in leathers, wearing regalia that he did not earn or make or truthfully that he even understands, in front of a statue donated by Heinz of a man who was devastated and traumatized by colonization. That violence continues: his family were among those forcefully removed, and land and ancestors destroyed for the Kinzua Dam in the ’60s, so this is not ancient history, but the non-Native citizenry of Pittsburgh seem to have a kind of amnesia about these events.

On the Columbus statue

I think public art is a great learning tool. I come from a place made famous for murals as markers of the past, of justice, of healing. Art is how my people held cultural continuity. I have no doubt that Columbus represents the common North American principles of competition, discovery, conquest, capitalism. Indeed, Pittsburgh's moniker "Steel City" celebrates these values. The road toward these values comes with terror, slavery, genocide, racism, enforced poverty, resource extraction, and environmental degradation.

The Columbus statue itself holds a place of pride in Schenley Park. Mary Schenley is considered a philanthropist, and she was a bit of a radical for her time. Her money came from her dad, Captain O'Hara, a key player in the murder of resident Natives, and so, round and round, we go.

If the citizenry of Pittsburgh wants to keep the Columbus statue, I say fine, and also let’s be transparent about what values are being celebrated with the place of pride of his terrible actions.

At least, let's put it out in the open instead of pretending that he should be heroized. Can we escalate his history as a fiend, a murderer, rapist, slave-trader, these being actions necessary to uphold American values? And perhaps, then we can also escalate the ways that these actions and values persist and repeat, until we get some truth and reconciliation into this conversation?

You know what my dream would be? Repatriate the land to the Council of Three Rivers and let the Nations decide what to do with the statue and the land. Maybe they would design something beautiful, marking the meeting of terror with the persistence and perseverance of nature, which is essentially the story of Native survival.

*The above interviews have been edited for clarity and length.

The City of Pittsburgh is seeking public input through Thu., Sept. 17. You can voice your opinion here: https://engage.pittsburghpa.gov/christopher-columbus