Local couple finds a venue up to the vegan-wedding challenge 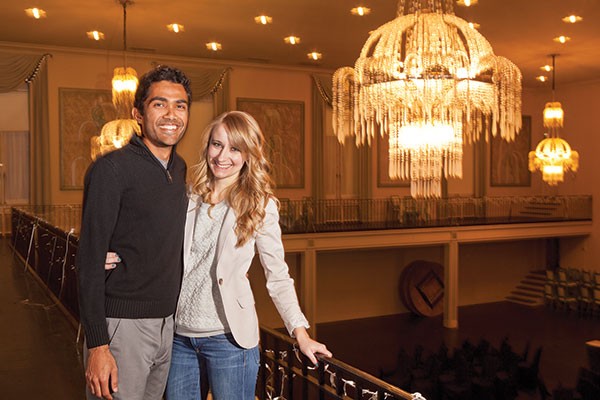 When veganpittsburgh.org alone lists some 50 vegan-friendly restaurants, you'd think throwing a vegan wedding here would be easy. But as Brittany Kregiel and Madhur Paharia learned, most venues' in-house caterers seem less than thrilled with the prospect of an all-vegan sit-down dinner for 200.

When the couple would ask, venues would say, "We're open to it," says Kregiel. She adds, "'Open to it,' kinda like, eye roll."

Then Kregiel and Paharia fell for the Twentieth Century Club and thought, "You know what, we just have to do it."

In his four years overseeing event dinners at the Oakland landmark, general manager Andrew Hutchinson had previously arranged only the occasional vegetarian option. But he and chef Bennie Parker embraced the vegan challenge — to make a meal without using any animal products, including dairy.

"It was an interesting experiment for him to do something a little out of his comfort zone," says Hutchinson. Kregiel shared recipes and websites (including her favorite, olivesfordinner.com). For the December tasting, Parker even devised a seitan-based version of the Club's signature chicken piccata.

Also on the menu were vegan versions of crab cake (from hearts of palm), "bacon-wrapped scallops," spanakopita, stuffed mushrooms, and spinach and ricotta ravioli (with tofu ricotta). Parker also made a port-wine vegan cheese encrusted in slivered almonds.

And? "It was delicious. They totally outdid themselves," says Kregiel. "I'm kind of mad at [Parker], 'cause he's cooking better vegan food than I am."

The banquet's price, Hutchinson says, was "pretty close" to the usual, because while some special ingredients were costlier, they saved (obviously) on meat.

A lesson for other vegans: "Even if the place doesn't advertise as vegan-friendly, just asking them, reaching out, was more productive than we thought," says Paharia.

The Mexican War Streets couple's "cruelty-free" wedding mandate extends to choosing makeup and hair artists who shun animal-tested products; vegan cupcakes instead of cake, and also as centerpieces; and alcohol made without animal products.

So they're set for April — sort of. Kregiel, a 28-year-old social worker, is a New Kensington native who stopped eating meat at age 11, and went vegan at 21. Paharia, 27, is a Westinghouse engineer who was born in India and has lived in the U.S. since age 12; as a Hindu, he was raised vegetarian. But neither family is especially vegan-friendly. Paharia's Indian relatives like their dairy. (Udipi restaurant is supplying a couple vegan Indian dishes for the wedding.) Kreigel's old-school Italian relatives were even tougher.

"Oh, you're not having a vegan wedding, are you?" they griped. Her mom said, "You don't have to eat [meat], but why can't I have it?" Others joked about sneaking meat into the reception.

But Kreigel stood firm. "It's a challenge, and of course I'm very competitive," she says. "I want to win them over." With help from a chef who's game, she just might.