Theatre Festival in Black and White 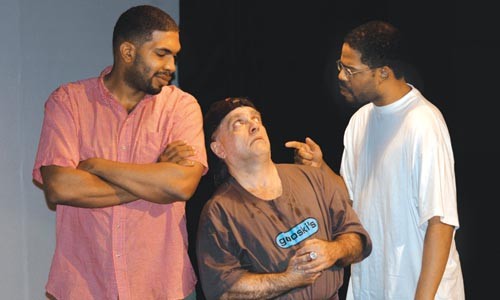 It's a lock: (left to right) David Conly, Jeff David Miller and Ezra Leslie Smith star in Wali Jamal's "Holding Cell," at the Theatre Festival in Black and White.

The Pittsburgh Playwrights Theatre Company's Theatre Festival in Black and White is in its fourth season. And I'm excited to say that year's festival features, far and away, not only the most consistently thrilling writing of all four years but, indeed, some of the best playwriting going on in this city right now.

"Assassination," by Brendon Bates, is, quite literally, the funniest play I have ever seen in my life. A mild-mannered teacher is driven to insanity by Bush's first term; the play is set on the Washington, D.C. rooftop where he's come to kill Bush at his second inauguration. Unfortunately, his 9-year-old daughter follows him and for 15 minutes the laughter never stops. "You can't kill the President, Daddy, you're a vegan!" Sterling performances by Jeffrey Carpenter and Nadia Cook-Loshilov, with Wali Jamal's fierce direction, knock this one out of the park.

"A Summer's Tale," by Astrid Cook, feels like a Movie of the Week about two 12-year-olds, one black and one white, and how their friendship wrecks havoc on their families. Heartfelt and not without subtle humor, Cook's play offers its own quiet rewards.

In "Around Midnight," Christina Maria Acosta tries to breathe new life into a time-worn plot -- a woman waiting for her man to call -- but never conquers her subject in this talky and contrived script.

"Holding Cell" is a blistering comedy/drama by Wali Jamal, directed with force by Mark Whitehead, about four men briefly thrown together in a police-station cell. By turns surprising, sharp, funny and mysterious, with strong performances by the cast, Jamal's play is engrossing and highly entertaining.

"The Kitchen," by Rob Zellers, is another Movie of the Week kinda thing about a black teen-ager breaking into the house of a Highland Park couple awash in their own white liberal guilt. The set-up is too precious to be credited, and Zellers rarely breaks new ground, but he's a swift, intelligent writer who knows his way around comedy. Jeannine Foster-McKelvia's direction is nicely understated, with spot-on turns by Ken Bolden, Carter Redwood, Nancy Mimless and Wali Jamal.

"F.O.R.D.," by David Turkel, is set in the trailer home of white trash, one of whom is on a spiritual journey. What a wonderful play this is, directed with gusto by Mark Clayton Southers and acted with enormous flair by John Gresh, Lissa Brennan, Mayme Williams and, here he is again, Wali Jamal. Turkel's ability to surprise us with outlandish, but textually true, twists is theatrical heaven.

"Ridin' Dirty," by (former CP scribe) Brentin Mock, is a sharp and compacted look at two black men, former childhood friends, whose lives have taken them down separate roads. The logic's a little hazy but the punch of the finale is strong, with equally strong performances by Gregory "Rico" Parker and David Conley.

"Gossip," by Dan Kirk is a cute skit about office politics and flirtations that, unfortunately, overstays its welcome. Ruthless cutting could turn this into the funny event Kirk obviously means it to be.

Nailah Blu Lewis's "For the Love of Friends" is a truly delightful little character study of two old friends, beautifully played by Cheryl El-Walker and Kim El, sitting on a porch watching the world spin by. Stephanie Figer directs with a light hand, giving this piece the simplicity and integrity it deserves.

"The Exile of King Harold," by Mark Clayton Southers, is the richest, most complex play in the pack. A Vietnam vet (and heroin addict) sits in his V.A. hospital room spinning out guilt and drug-related flights of fantasy. The rage fueling the piece, the haunting sadness perfuming every bit of it, the humor bubbling below the surface, all make for a powerful event. There's a meandering quality to the play's structure, as well as to the performance by Don Marshall. But when Southers and Marshall connect, it's like watching a volcano explode on stage. "The Exile of King Harold" could be -- in fact, I demand that it be -- expanded into a full-length play.

The problem with thinking that Shakespeare was the greatest writer of all time is that, at some point, you have to rationalize his really junky plays -- King John, Timon of Athens, Twelfth Night, Measure for Measure. I have the same trouble with Tennessee Williams and his huge, and hugely uneven, body of work. The difference, of course, is that Williams -- unlike Shakespeare -- had the ability to write great plays. However, Camino Real, now at Open Stage Theatre, is not among them.

It's set in the village square of an unnamed Mexican resort town, run by a malevolent hotel proprietor named Gutman. Desperation hovers, death lurks and everyone wants to leave. Wandering into the play is an assortment of fictional and real people: Cervantes' Don Quixote, Dumas' Camille, Casanova and Lord Byron. You don't even have time to ask why, because Williams introduces his leading, and oddest, character: Kilroy (as in "Kilroy was here"). He's the souped-up idealization of the American can-do, gee-whiz spirit, talking in '40s movie-dialogue clichés and written without a trace of irony.

As befits Williams, there are occasions of staggering beauty and poetry -- one of these run-down characters says, "My heart is too tired to break" -- and scenes of intense theatricality. But there are also long, dry patches where Williams slides from enigmatic to obscure to incomprehensible. I'll follow him anywhere, but he needs to mark the trail a little better than this. At just under three hours and with more than 30 characters, Camino is a mammoth piece of writing. But the play gets lost in itself and never recovers.

Still, perversely, I love Williams and can't thank Open Stage enough for going through what must have been a nightmare putting this show up. In addition to assembling this huge cast, in Beth Steinberg's colorful costumes, and the monstrous set, nicely rendered by Amy Maceyko, director Mark A. Calla probably lost years of sleep wrestling with such an extravagantly overwritten but ultimately under-developed script. That the whole thing manages to hang together is high praise.

Art Terry is all velvety menace as Gutman, David Crawford does well by Casanova's exhausted nobility, and Naomi Grodin finds and plays the laughs of the gypsy madam. Erica Highberg's turn as the doomed Camille is a deeply moving, expressive performance. And as Kilroy, Jeffrey Simpson refuses to condescend or wink at the audience. In the process, he makes something human out of, in truth, an unplayable role.

In the Midnight Hour

Though it's supposed to be set in a Harlem apartment, I think we're actually near Three Mile Island, because radiation is the only thing that could explain the insanity. People talk about nothing, and endlessly, and the only way we know they're done is that everyone chuckles warmly. All the time.

Papa Daniels: Would you love me if my name weren't so easy to say? (He chuckles warmly.)

The daughter says she's "thinking about joining the movement" and Papa goes to a psychiatrist because he's afraid of 125th Street. A defrocked seminarian is writing a book about the dialectics of Catholicism, and two young women in evening gowns wander through the apartment -- and nobody can see them. When the son entered toward the end of the first act playing a flute, I knew I wasn't going to hang around for two more acts. Collins won.