The Year in Visual Art

Thinking Outside and Inside the Box in 2015

If you value innovation in art, boxy gallery spaces present a challenge, if not an outright problem, that goes beyond corners. The “white cube” carries a lot of baggage, including expectations from artists, curators, funders and audiences. Still, galleries continue to be indispensible for many kinds of art, with some artists happily disrupting or even disrespecting gallery conventions. Other artists enjoy a different kind of freedom by working outside of gallery spaces altogether.

Ideas that developed out of the ’60s questioning of tradition continue to offer alternative approaches. Site-specific installation is one such form that, when done with even a modicum of commitment, is enriched by what makes a place what it is. Iteration 2 of the biennial Alloy Pittsburgh (Sept. 26-Oct. 31) once again seized an unfair advantage by utilizing the truly special relic that is the Carrie Blast Furnaces site at the Rivers of Steel National Heritage Area. Project curators Sean Derry and Chris McGinnis prodded the exhibiting artists to engage with the characteristics, history and meaning of the site. The result: All of the projects were interesting and relevant, while Rose Clancy’s rust-induced impressions on fabric, Oreen Cohen’s contemporary take on stained glass, and Dan Ivec and Nick Liadis’s delightful sequence of annotated sketches stood out for me in their ability to connect with, as well as activate, the historic site.

Clayton Merrell’s “The Sky Beneath Our Feet,” at Pittsburgh International Airport

Sometimes there’s thinking outside the box inside the box. One evergreen idea, spanning various forms of new music and sound art, is that sound can be directed through a process rather than being specifically composed. Aftersound: Frequency, Attack, Return (Aug. 21-Nov. 22), curated by Melissa Ragona and Margaret Cox for Carnegie Mellon University’s Miller Gallery, acknowledged roots, most notably chance-composition pioneer John Cage, who was also a visual-art pioneer. This challenging and, at times, demanding exhibit fast-forwarded to the present, with elaborate processes and vaguely sculptural accumulations of hardware often upstaging the nonmelodic sounds.

Suddenly, window projects are popping up like dandelions in May. In the category of Good Ideas, there’s windowSPACE, curator Murray Horne’s vision that an underused corner of SPACE could engage passersby as effectively as a department-store window. There’s much promise in this quirky Downtown venue if artists can see it for what it is, and isn’t. Tom Sarver’s The Sideways Museum (Jan. 23-May 3) mounted a fine exhibit of folk and visionary art that both needs and merits a more conventional setting, but here struggled with window-glare, viewing distance and lack of labels. On the other hand, Thinkerers (May 15-June 28), by Randy Gilson of the North Side’s Randyland (a you-gotta-love-it-or-hate-it project if ever there was one), held the space with a less-nuanced advertisement for himself.

At the Atwood Window Gallery, in Oakland, Leo Hsu is overseeing projects that bring life and fresh paint to the long-dormant façade of Spice Island Tea House’s adjacent storefront. The Warhol Store, at The Andy Warhol Museum, also has been providing window space to young artists. Daniel Pillis’ “Andy Warhola’s Living Room” (which closed March 1), a 3-D version of an early Warhol painting, was site-specific and able to hold its own amongst the merchandise. 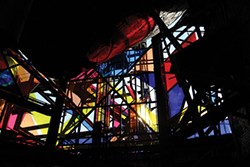 If you think that the Pittsburgh International Airport’s concourse is just something to run across as your plane takes off, then think, and look, again. Contemporary landscape maestro Clayton Merrell designed an elegant terrazzo floor, enhancing the place with that rarest quality in public art: subtlety. With silhouettes of local skylines including the North Shore, Oakland and, of course, Downtown, Merrell’s scheme graces the space around the increasingly high-end shops that, frankly, benefit from some modulation of their single-minded purpose. Compliments to Pittsburgh’s Office of Public Art for its role in tapping a local artist who’s up to the big-budget job, and to the skilled crew who executed it beautifully.

Meanwhile, Conflict Kitchen, directed by Jon Rubin and Dawn Weleski, is more vital than ever. Begun in 2010 as a nontraditional art project and currently sited to catch workaday residents as well as the occasional special-events crowd on Schenley Plaza, its exterior is an eye-grabbing affront to ethnic and racial narrowmindedness. With restaurant-quality food, an expanded menu of info and events, political relevance du jour provoking an occasional brouhaha that proves people are watching, and now unionized restaurant employees, Conflict Kitchen is maturing into a forum that shows what’s possible when art really and truly disregards boundaries.