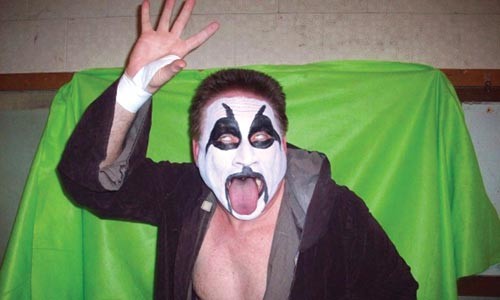 Call it "scripted" if you want, but professional wrestling has done a lot of good in this world. It keeps the market for Spandex healthy; more recently it has kept actor Mickey Rourke off the streets. And maybe, just maybe, it can keep help raise a few dollars for a local school.

Or so believes Ken Jugan, who wrestles under the name "Lord Zoltan" when not holding down his day job: working in the Administrative Office of the Court of Common Pleas.

Jugan got his wrestling start by shooting news photos of the matches in the 1980s, right before pro wrestling became a pop-culture phenomenon.

"From there," he says, "I started messing around in the ring and the promoters started inviting me back." Jugan never made it big, but he did square off against the likes of Andre the Giant and the Iron Sheik. (In fact, on YouTube you can still can watch him face against the Sheik in a February 1984 match.)

"I still love it today and still wrestle an average of two or three matches per week," he says.

So when the Western Pennsylvania School for the Deaf -- which his son Adam graduated from last year and his son Blaise attends as a sophomore -- needed to hold a fundraiser, the answer for Jugan was obvious.

Jugan staged the first Deaf Wrestlefest in 1994. The matches, a mixture of well-known stars and regional pros, ran until 2000. Over the years, the event featured top names like Cactus Jack and Greg "The Hammer" Valentine.

But in 2000, the school's parents' organization decided to end the fundraiser. Jugan surmises the decision stemmed from the direction that big-time television wrestling was going: toward more violence, profanity and scantily clad women.

"At that time, professional wrestling on television was relying heavily on R-rated content, and I think a lot of people didn't want the school connected to that," Jugan says.

For whatever reason, the school never found a suitable fundraiser to replace it. So this year, the 140th anniversary for the school, Jugan decided to try to bring Deaf Wrestlefest back to Pittsburgh.

The independent show will be held at 6 p.m. Sun., May 3, at the Western Pennsylvania School for the Deaf, 300 E. Swissvale Ave., in Edgewood. In addition to scores of local wrestlers, the card will feature veteran pros J.J. Dillon, Brutus "the Barber" Beefcake, Missy Hyatt, Pittsburgh legend Dominic DeNucci and former WCW and WWE superstar Shane Douglas (a New Brighton native).

Jugan is especially excited about the return of Dillon, a well-known wrestler and manager whose heyday was in the '80s and '90s. "J.J. hasn't wrestled in years, but he said he wanted to come and help us out," Jugan says. "He had his first match in Pittsburgh and I think he's always had a soft spot for the city in his heart."

And despite what fans may see on television, this show will be family-friendly.

"I think a lot of guys are just willing to come out and help out for a good cause," he adds.