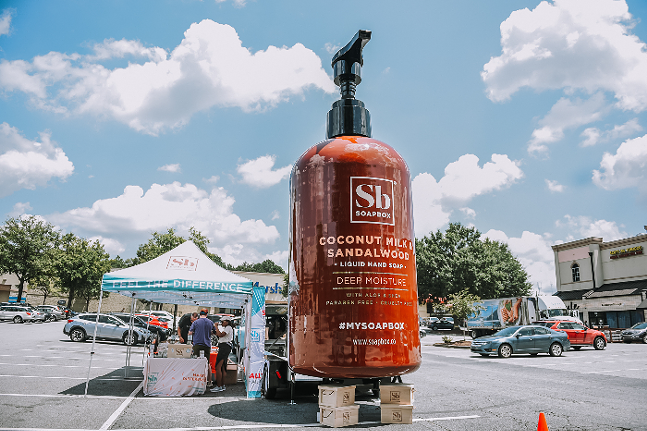 On Wed., Aug. 4, the world's biggest soap bottle, made by the Washington, D.C.-based beauty company Soapbox, will appear in the parking lot of the Settler's Ridge Market District in Robinson for the Soapbox Giving Tour. Standing at 21-feet tall, the 2,500-pound metal and fiberglass pump bottle – labeled as containing Coconut Milk and Sandalwood liquid hand soap – is currently on a nationwide tour aimed at “raising awareness for the importance of hand hygiene,” according to a press release.

The bottle debuted in New York’s Times Square on July 15, and set a new world record for the largest bottle of liquid soap (yes, this is a real title, and it was previously held by a shampoo bottle made in Saudi Arabia), according to the World Record Academy. From there, the bottle has traveled to over a dozen other cities, including Boston, Buffalo, and Atlanta.

In addition to being a spectacle, complete with a photo booth and giveaways, the visit will also invite participants to help assemble hygiene kits to be delivered to the Allegheny County Office of Children, Youth and Families and distributed to local children in the foster care system. (Please note that the bottle is not actually filled with soap, so don't expect to get slimed Nickelodeon-style out of its pump dispenser.)

Soapbox will also make a large donation of soap bars to Northside Common Ministries, a community-based nonprofit that works to feed and house Pittsburgh’s homeless population.

Soapbox, which already donates a bar of soap every time one of its products is sold, announced that it would donate pallets of soap and personal hygiene kits to local charities at every stop on the tour. As a result, the company not only created the world’s largest bottle of liquid soap but broke a Guinness World Record for Most Hygiene Product Donated in One Week.

Soapbox co-founder and CEO, David Simnick, believes the tour will also serve as a reminder to continue practicing healthy habits as the COVID-19 pandemic drags on.

"The COVID pandemic has helped highlight the importance of handwashing, but as mask mandates go away, we can't let our guard down," says Simnick in a press release.

He adds that people around the world lack access to basic care items, including in the U.S., where food stamps don't cover essential personal hygiene products like soap.