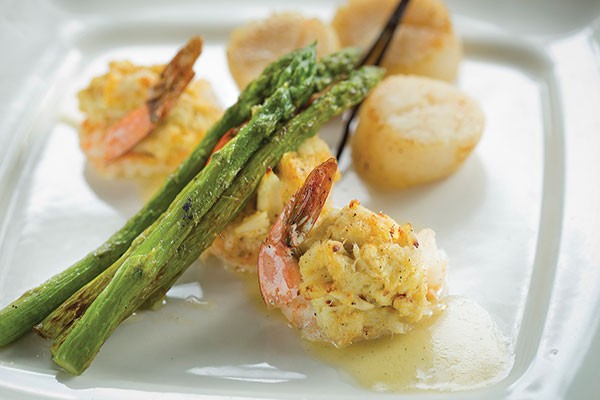 The Wooden Nickel has been a Monroeville institution for more than 60 years. Recently, a new owner and an update made us wonder if this grandfatherly establishment might have something fresh to offer.

From a back channel off the Miracle Mile, we navigated between a Denny's and an Eat'n Park, and pulled up to The Wooden Nickel's stone-faced building. We were seated in the formal dining room, adorned with a fireplace, ionic columns and surprisingly bright lighting. (The evening we were there was a bit breezy for the outdoor patio nestled up against a retaining wall and secluded from the parking lot. But it would be a nice option in summer.)

Executive chef and general manager Joe Bello has worked at traditional steakhouse Capital Grille and the slightly more modern Ditka's. His experience shows in a menu designed to please longtime customers, accustomed to Continental classics like mussels with white wine and filet Oscar, as well as entice a newer generation that might be simultaneously more casual (in dress and demeanor) and more sophisticated (about food). Innovations like farmer's chicken — seared breasts over pesto cream and a wild-mushroom ragout — are calculated to age well. The menu also includes substantial seafood and Italian sections, both reflecting the theme of updated tradition.

In Pittsburgh, nothing could be more traditional than a starter of three cocktail shrimp and a young romaine leaf packed with crab "hozel" (more accurately, crab Hoelzel, invented at the Duquesne Club by one of its members, John Hoelzel, in the 1940s). In hindsight, it's amazing this dish had to be invented: Crab Hoelzel is simply lump crabmeat tossed in a light vinaigrette and seasoned. The Nickel's version was heavy on pepper, light on dressing and unremarkable. The shrimp were extraordinarily plump and firm, but somehow lacking in succulent shrimp flavor — despite being poached in Duquense Pilsner, lemon and spices.

To sample the updated appetizers, we tried margarita lettuce wraps, filled with Cuervo-marinated chicken with lime, cucumbers, onions and a side of lime aioli. This had the bones of a great dish, with crunchy vegetables contrasting with tender morsels of breast meat. At its best, we think it would have been — like a great margarita — perfectly balanced between sour, salty and sweet. But the latter flavor distinctly dominated, and the creamy, mild aioli wasn't nearly tart enough to counter-balance.

Even updated, The Wooden Nickel has an old-school upscale ambiance, so we were a bit surprised to find Uncle Sleepy's Angry BBQ platter, including a half-rack of ribs, pulled pork and pork-belly confit, on the menu; it seemed more suited to a roadside barbecue joint, where we could help ourselves to as many paper napkins as we needed. We went with the slightly more staid Not Your Mama's meatloaf, which also features Uncle Sleepy's sauce, drizzled atop a tower of toasted jalapeño cornbread, applewood-smoked bacon-wrapped meatloaf, mashed potatoes and onion rings. The sleepiness seemed to outweigh the angriness of the sauce, although at least it wasn't too sweet; the meatloaf was moist, but surprisingly bland. A stunt dish calls for big flavors, but this one didn't deliver.

Kona lamb chops featured delicious meat, but even here the dusting of coffee and chocolate underperformed. While they certainly pumped up the flavor of the crust, it was not in a way that merited headline treatment. Far worse, however, was a bed of risotto that was inedible, undercooked grains bound together with starchiness, not creaminess.

From a section of the menu titled "From the Old Country," seafood fra diavolo finally brought some flavor to the table with an assertively spicy marinara sauce over hand-rolled macharetto noodles. The shrimp, scallops and mussels were serviceable.

The best items of the night were chicken-parmesan soup and four-cheese ravioli. The former — essentially chicken soup in a creamy, Italian-accented tomato broth — would make a wonderfully satisfying meal with a salad alongside. The ravioli, by local artisanal maker Fede, were tender and pliant, and the Nickel's creamy pesto was a helpful companion: It added rich bass notes and herbal top ones, while allowing the wonderful pasta to remain the star at the center of the dish.

A dining experience like this one can be hard to evaluate. The menu permitted some casual choices even in a sit-up-straight setting, and most of our food could be described as good. But how good should it be to justify the white-tablecloth ambience and special-occasion prices? Better, we think, than this.