The Woman in Black

Plenty of atmosphere, but not much story, in this period ghost thriller 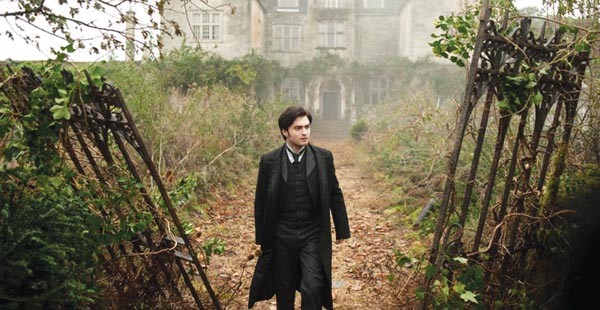 In the early 20th century, a young London lawyer named Kipps (Daniel Radcliffe) journeys to a small town to sort out a tricky estate. But Kipps is not welcome in town — a morose place where an unusual number of children seem to come to harm. To sort out the will and to avoid the town meanies, Kipps decamps to the dead woman's mansion, located on an island conveniently cut off by the tide twice a day.

Once Kipps is ensconced in Spooky House, James Watkins' thriller settles in for a long period of atmosphere in search of a story. Kipps wanders from room to room, encountering all the expected interiors: dark hallway, creepy nursery, locked door, lovely view of the graveyard. Things creak, tinkle and go bump — and if this is your first horror film, you might get a jolt or two when something SUDDENLY POPS UP!

This could have been a slow-burner of a psychological ghost story, particularly with the emphasis on Kipps' unresolved grief for his late wife. But the sketchy plot, which grows increasingly baroque — what with child suicides and dogs dressed as babies — gets sucked into one of the nearby pits of quicksand, only to re-emerge in the last reel with unsatisfying feints and cheats.

Most of the film's pre-buzz has been about Radcliffe, and how the young Harry Potter actor will fare beyond Hogwarts. A naive young man poking about a dark mansion in search of supernatural evil isn't much of a stretch for Potter ... er ... Radcliffe, but he manages it just fine. Well enough, in fact, that I simply felt sorry for him, a bright young man trapped in this gloomy, pointless film.