A remake of the 1941 classic lacks intrigue and heart 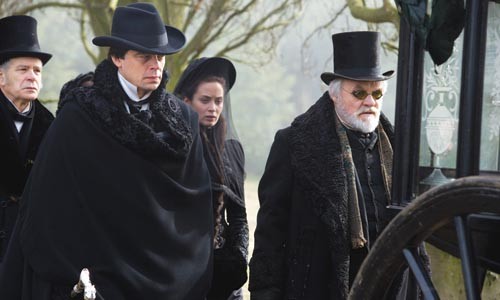 "Even a man who is pure at heart and says his prayers by night / can become a wolf when the wolfsbane blooms and the autumn moon is bright."

The Wolf Man (1941) was my favorite Classic Monster Movie, maybe because the character was sympathetic. A guy doing right thing -- defending a woman from a werewolf -- gets bit, and is thus cursed to turn lupine once a month and kill people. Dracula seemed to enjoy being predatory, and Frankenstein was a confused lunk -- but Lawrence Talbot, a.k.a. The Wolf Man, was wholly cognizant of his uncontrollable killer side and tormented by it. So, despite Universal's cheesy studio fogs and Lon Chaney Jr.'s hairy makeup, the film is really about a resonant and ancient tragedy -- the duality of man, and how any of us may harbor an unstoppable evil.

Joe Johnston's film -- The Wolfman -- adapts Curt Siodmak's 1941 screenplay, but falls short of delivering a satisfying package. A few tweaks work -- the story is now set in Victorian England, a good time for the intersection of native superstition and scientific inquiry. But other changes, such as fleshing out the protagonist's family history, are hokey and clunkily delivered. (Spectral flashbacks, anyone?)

Actor Lawrence Talbot (Benicio del Toro) hasn't returned to his ancestral home since he was a boy, but a letter from his brother's fiancée, Gwen (Emily Blunt), draws him back. His brother has been horribly murdered, and yet his father, John Talbot (Anthony Hopkins), seems nonplussed. The villagers initially suspect traveling gypsies, but soon all are aware that something much more horrible than a man is on the loose.

While investigating, Lawrence is attacked by the creature. Now when the moon is full -- which happens a lot in this film -- he turns into a wolf and goes on killing sprees. The carnage attracts the attention of Scotland Yard Inspector Abberline (Hugo Weaving), who rightly suspects the moody thespian. "Who else," Abberline asks, "might be inside that head of yours?"

These days, Johnston has loads more special effects than a fog machine at his disposal, so we see a lot of Lawrence morphing into wolf, the wolfman leaping across London's rooftops, and much spectacular disemboweling, garroting and decapitation. But for a film with plenty of internal organs on display, it's noticeably missing heart.

The characters are so thinly sketched, it's hard to care about whether any of them live or die, much less what internal anguish they go through. When Lawrence discovers he's a werewolf, he takes it as casually as a minor inconvenience. And the film never properly establishes the relationship between Lawrence and Gwen, even as its conclusion relies on it. (As we learn early on from an old gypsy woman, the werewolf "can only be released by someone who loves him" -- and since there are barely a half-dozen characters in this account, the even money is on Gwen.)

It's a shame that three capable actors seem wasted: Only Blunt makes her character remotely credible. Del Toro seems undone by all the CGI morphing, and Hopkins may as well have drifted in from a comedy -- he swans around in a leopard-skin lounging robe and delivers all his lines with an archly raised eyebrow.

The plot is timeless, but The Wolfman winds up dreary without being soulful, pedantically plotted, and -- other than better gore -- offers no improvement over the classic film.