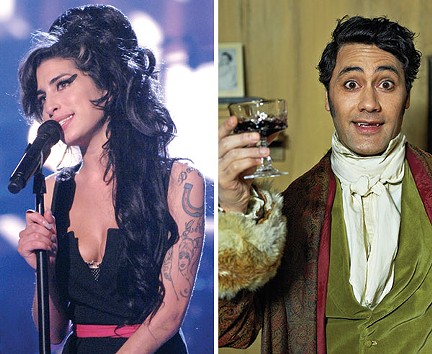 Two of 2015’s worthwhile films: Amy and What We Do in the Shadows

This year, lots of popular movies made year-end best-of lists: You don’t need me to tell you to see Mad Max: Fury Road or Inside Out. Instead, here are some smaller, worthwhile films to catch up with during the dark winter months.

It’s not easy being a girl: These films tackled female identity, and the unique challenges of being a strong or outspoken female in a male-dominated culture, from the troubled teen years (Girlhood, Diary of Teenage Girl, Metalhead) through mid- and late-life woes (Clouds of Sils Maria, Ricki and the Flash, Grandma). Also notable: the oddball Welcome to Me, the Israeli courtroom drama The Gett, the doc Amy (Winehouse) and the big-hearted, fierce and funny Tangerine.

These films made something fresh from formula, whether it was vampires (the hilarious What We Do in the Shadows), sex-horror (It Follows), male stripping (the weirdly female-positive Magic Mike XXL), cartel actioner (Sicario) and twisty psychological thriller (The Gift).

For you tech-culturalists, a double feature to ponder: Alex Gibney’s warts-and-all bio-doc Steve Jobs: Man in the Machine and Steve Jobs, Danny Boyle and Aaron Sorkin’s stylized take on the same material. And after you see The Big Short, check out 99 Homes, for an equally dark, but smaller-focus riff on the 2008 mortgage mess.

Finally, there are bad films never to speak of again (ahem, Hot Tub Time Machine 2), and then there are the deliciously so-bad-so-good ones, suitable for the discerning snarky viewer: Jupiter Ascending, Roar, 50 Shades of Grey and Jem and the Holograms.