The White Chip portrays one man’s struggle with alcoholism

The production is handsomely constructed, making terrific use of myriad sound effects and musical riffs, all impeccably timed. 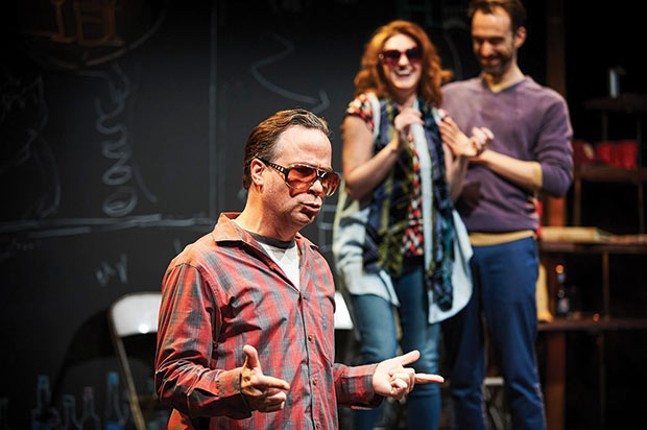 Once upon a time, the playwright/director Sean Daniels got a good review in The New York Times. But even that couldn’t persuade him to stop destroying his life with alcohol.

In his autobiographical play, The White Chip, staged by City Theatre at Lester Hamburg Studio, Daniels (portrayed by Kyle Cameron) tells his story in a virtual monologue, with two other actors — called #1 and #2 in the program — serving as parents, friends, lovers, colleagues, and rehab counselors, among others. They also keep score on a chalkboard: For every good thing Sean discovers about drinking to excess, “Pro” gets a slash, and for every bad thing, one point for “Con.” Spoiler alert: Pro loses.

Daniels grew up the son of lapsed Mormons, so when he finally enters rehab — after losing a prized job at a theater in Kentucky — he chooses a rather Jesus-y place. It doesn’t work. Then, he gets counseling from Jews, who teach him about the science of alcoholism. This stint sticks, and in a mercifully short mini-lecture (and final jab at religion), he says, “How many didn’t make it because we lead with God and not with science?”

The production is handsomely constructed, making terrific use of myriad sound effects and musical riffs, all impeccably timed. The stage floor itself is a giant chalkboard, which Daniels uses to document moments in his life, and the wall at the back of the stage contains doodles, aphorisms and the molecular structure of alcohol.

Daniels approaches his story with a wit that ranges from the playful to the sardonic, and director Sheryl Kaller sees no reason to contradict him: Her fast-paced, broadly humored, genially crowd-pleasing production only quiets down occasionally for touches of drama and self-discovery. But she (or Daniels) might have chosen a more nuanced approach that doesn’t force each scene to be one thing or the other. This sometimes leaves us wondering whether Sean’s rapid-fire horror stories aren’t as much hyperbole as fact.

We clearly witness this all from Sean’s point of view, which may explain why Daina Michelle Griffith and Daniel Krell, as #1 and # 2, usually perform in broad (and occasionally irritating) ways that border on the cartoonish. Only for a moment at the end, when Sean and his mother get and stay sober, does #1 become a woman who seems real. Cameron — lean, bearded, energetic — is relentlessly agreeable as Sean, and when he’s allowed to tamp it down, you sense that he could have handled the more complex version of Sean that might have been.