The Westmoreland surveys American painting in the 1940s -- courtesy of the old Carnegie Institute.

At times, Painting in the United States 2008, at the Westmoreland Museum of American Art, reflects a lovely, organized, optimistic world -- but also an underlying anxiety. In a nutshell, it reflects America in the 1940s.

This somewhat confusingly titled show, the brainchild of curator Barbara Jones, assembles for the first time 48 paintings originally displayed during and just after World War II. Most of these were culled from seven exhibitions held at the Carnegie Institute (now the Carnegie Museum of Art) in lieu of the then-annual Carnegie International. The shows, noted a New York Times critic in 1943, "prove that even obstacles of vast magnitude, such as war creates, can be surmounted when the will to keep culture alive matches a free nation's will to survive." Those exhibitions showcased new works by established and emerging American artists. Among the highlights of this 2008 sampling, for example, are paintings by Edward Hopper, Andrew Wyeth, Thomas Hart Benton, Samuel Rosenberg, Max Weber and Grandma Moses.

In the 1940s, curators John O'Conner and Homer St. Gaudens searched for artwork in eight categories, including academic, surrealistic, abstract and primitive. Interestingly, they left out abstract expressionism, even though Jackson Pollock, Mark Rothko and others were rising in popularity. The main schools introduced, and reflected in the 2008 show, are social realism (with a touch of surrealism) and Modernism.

The paintings are more than a tour of great art: They document a country at war, a time of rationing and front-yard victory gardens. Roy Hilton's "My Ivory Tower" displays the broad side of a large white house, cozy front and back porches, with a crazily neatly hoed garden in front. Lines of staked tomatoes are of uniform height and spacing -- like soldiers lining up for review -- with not a weed (or person) in sight. Above, clouds veil the sky.

The handful of images overtly portraying war suggest the nervousness of a country enlisting soldiers to fight, but not on its own soil. Everett Warner's "Pacific Patrol," for instance, has three fighter planes mingled within scores of lovely luminous, puffy clouds, while a naval fleet glides through the calm blue waters below. Meanwhile, on the homefront, the days are beautiful and clear -- children read, farmers plow, coal-miners descend -- but everything is just a little surreal, just a little not right. In Edward Hopper's "Pennsylvania Coal Town," a citizen stands in his side yard, rake in hand, absent-mindedly halted mid-chore; beautiful late-afternoon sun streams between his and his neighbor's house, but a dark shadow is cast in the foreground. The man, pensive and somber, looks toward the light.

This show reflects an America that has survived Prohibition and the Depression, a country that will soon plunge into McCarthyism and the "Space Age." Much of the work dates to a time before the full atrocities of the Second World War are known. We're in limbo, artists freely suggesting Marxist movements alongside the modern -- an adjective that, with a lowercase "m," will soon be attached to each household appliance.

This combination is best shown in Samuel Rosenberg's outstanding "Long on the Way." Here he depicts an exhausted African-American mother and child, their features abstracted as they lean on a broad fence that simultaneously holds them up and bars them from going forward. It's Modernism with a social conscience, and part of Rosenberg's "stained-glass period," a work whose sharp angles and glowing colors create a beautiful scene, while relaying a troubled message.

The show's chronology underscores how cultural perspectives and landscapes were changing before the artists' eyes. Two paintings provide a particularly useful contrast. George Ault's "Bright Lights at Russell's Corners" is a haunting farm scene set in pitch-black night -- just a single light mounted on a red barn, casting a glow onto the country lane, silhouetting the rural mailbox, the mishmash of rugged fence posts bordering a field, exposing the white farmhouse with its small tree, leaves glowing a dim red. There are tiny specks of stars. You can practically hear the crickets. The landscape suggests angles and geometric shapes, not a person in sight.

"Bright Lights" is hung catty-corner from Niles Spencer's "The Silver Tanks." Here we have not a rural but an industrial landscape abstracted into geometry: tanks, ladders, buildings in shades of burnt red, yellow, gray, black and orange. Once again, no inhabitants, just the product of their labor.

Both of these worlds, each thriving in this fine show, offer subtle lessons in cultural history, while walking visitors through an American vision of emerging art in the 1940s.

Painting in the United States continues through Oct. 19. The Westmoreland Museum of American Art, 221 N. Main St., Greensburg. 724-837-1500 or www.wmuseumaa.org 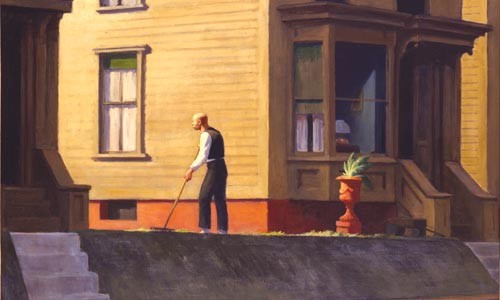