The Warhol's Factory Direct bridges the gap between art and industry. 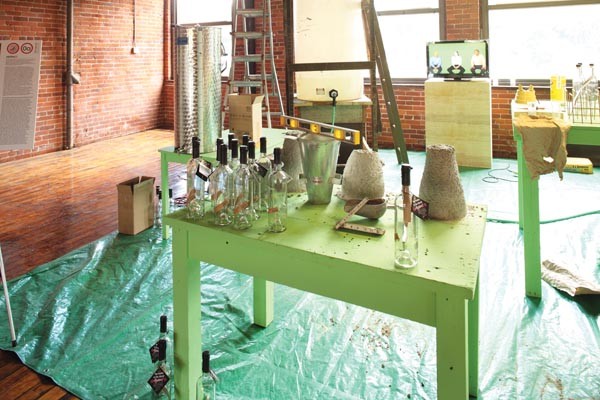 Factory Direct: Pittsburgh sounds straightforward, but it's an exhibit with a complex set of goals, players and outcomes. Fourteen artists, local and international, were invited by Andy Warhol Museum director Eric Shiner to participate in the exhibition, which was designed to generate new work through residencies in local host industrial facilities. Shiner adapted and expanded the "factory direct" concept originated by Michael Oatman in Rust Belt Troy, N.Y., and subsequently developed at New Haven's Art Space. Industry is a major economic driver, and Shiner sought to create bridges between art and traditional industries as well as technology, education and medicine.

While many artists now routinely contract out the fabrication of their work, and while many companies employ all manner of creative talent, Factory Direct: Pittsburgh is unusual in offering artists time and resources, including technical expertise, to realize projects. Meanwhile, participating factories and businesses benefit from fresh ideas as well as the exposure and publicity generated by this exhibit. If it's a far cry from standard PR, it does include association with the Warhol's own innovative brand (on which the museum regularly delivers).

The resulting projects wander into underexplored territory and together achieve wide-ranging relevance. While a couple of pieces are sited at the Warhol Museum, most are located — fittingly, given Warhol's embrace of art-and-industry —  in a Strip District loft building. That distances it from the world of white-cotton-gloves art-installers (though I'm sure white cotton gloves were used). The adaptation of the space and the siting of the artwork is terrific, a cross between the industrial loft that the space once was and a fashionable-living loft of old beams and breath-taking views that offer escape from stifling domesticity.

What's on exhibit provides glimpses into the process by which things are made in art and in industry. Dee Briggs' "Flower Girl," developed out of the invisible labor of research and experimentation, is at once graceful and mildly threatening, holding pride of place in the Warhol's lobby. Created in conjunction with TAKTL, a high-end architectural-concrete company, "Flower Girl" dramatically presents mounted panels of imprinted concrete. The panels combine the geometric and the organic while marrying the decorative and the industrial — standard in the 19th century but anathema to modernism — and they appear to have applications in building.

Factory Direct prompts one to think about what a factory is today — typically more high-tech clean than Dickensian dank — how manufacturers fit into a regional economy, and how factories are part of a larger process that includes everything from research and development to marketing and distribution. Tomoko Sawada's "Sign" is a grid of Heinz Ketchup labels in 56 different languages (the absent 57th being the commonest world-wide, in English). The work has an initial clarity that, with subtext and backstory elaborated through clear and essential wall labels, leads to thinking about research, marketing, multinational corporations and more. At another extreme is William Earl Kofmehl III's multi-faceted installation "South Oakland Crypt," which zigzags from Warhol's childhood Oakland residence to the bottling of Boyd & Blair vodka to a cardboard box shoveled full of cement. Kofmehl, tireless researcher and indefatigable organizer, has as his far-reaching goal a home for artists' residencies (details to be worked out later). Meanwhile, we have a color-coordinated accumulation of disparate parts that maps nonlinear thinking, only appearing chaotic.

Edgar Orlaineta, of Mexico, recreated from photographs an elaborate kinetic toy — portable, with many colorful and cheery geometric shapes — designed by architect/designer Charles Eames and subsequently lost track of by ALCOA, which had commissioned it. Orlaineta also exhibits brightly colored skirts and a related video based on the forms and motion in Eames' sculptural toy. For "Purge," Fabrizio Gerbino worked with the facilities and resources at Calgon Carbon Corporation, though he didn't engage with the particulars of Calgon's water-filter manufacturing. Instead, he hand-cast hundreds of similar pieces that look like industrial whatnots from a factory storeroom, while also resembling a cross between a diaphragm and a bra cup. With their radial symmetry and monochromatic hues, they're visually inert. Yet when displayed in a grid on the wall, they conjure an industrial showroom. Chakaia Booker's "Predator X," created at the Robotics Institute at Carnegie Mellon University, combines high tech and DIY make-do in an insect-like animated sculpture of human scale, a whimsical robot fashioned with plastic tubing, electronics, bicycle inner tubes and, inevitably, duct tape.

Working with Forms+Surfaces, Ryan McGinness explored multi-layered transparent materials and etched graphics. McGinniss's "Women" series features abstracted representations of "woman," each vaguely modernist image as clear as an international symbol and as stylized as a corporate logo, with mirrored finishes keeping us on the surface. Sarah Oppenheimer, familiar for her giant aperture cut in the floor at the Mattress Factory, worked with PPG Industries to produce "W-13/SD," currently at the stage of elegant engineering drawings proposing architectural interventions with thin film coatings. Not currently realizable, this isn't the only project that, it is hoped, will continue to develop, a goal to which the Warhol Museum appears to be committed.

French artist ORLAN utilized the capabilities of Body Media's electronic armbands to extend explorations of her body, measuring the spaces of the Warhol Museum and generating a video animation of herself sans clothing and skin, achieving a new level of uninhibitedness. Ann Hamilton, working with Bayer and the Pittsburgh Post-Gazette, created "NEWS," photographic images as hazy as a dream with proffered hand-held objects visible through the translucent membrane Duraflex®; the printed newspaper supplement, available in the gallery, was integrated into a special edition of the newspaper.

Thorsten Brinkmann, of Germany, intervened at the tail end of consumption with "Rocks on," upcycling goods from Construction Junction in a clever, precise arrangement that riffs on everything from the rigidities of architectural space to merchandising display, crowd control and the laws of gravity. Irish artist Jeanette Doyle, working with railroad switch-and-signal manufacturer Ansaldo STS USA and ruminating on clarity and opacity in communications systems, created a video, animations and altered photos. While Doyle demonstrated a blazing intelligence during the very thorough June 24 Factory Direct panel discussion at the Warhol, the artworks convey little of that thinking. The video tour of the factory, for instance, is almost entirely obscured by a simple diagram filling the screen — more of an exercise in obfuscation that an essay on communication.

A couple of projects feel tangential. Mark Neville's slideshow intermingling gorgeous photographs of residents of Braddock and Sewickley results in a generic humanism that illuminates little of the realities of money and power. And Todd Eberle's quick take on corporate-headquarters exteriors and factory interiors counters his assertion during the panel discussion that any photograph can be made interesting by repeating it four times in a grid.

Pairing contemporary artists not quick to respect boundaries with the expertise and insight prevailing in these companies and factories is a monumental effort by the Warhol. The results expand the field of contemporary art. With such process-oriented work, evaluation can be difficult, while the preservation function we associate with museums can be rendered impossible (though the Warhol Museum is chartered to collect only works by Warhol). The outcomes of these projects provide a cross-section of ways of thinking and making that can be logical, irrational or so obscure that it's difficult to envision the box that is being thought outside of. Yet this exhibit offers an opportunity to reverse-engineer how these outcomes came to be, with more markers along the way than in the factory output we usually encounter.