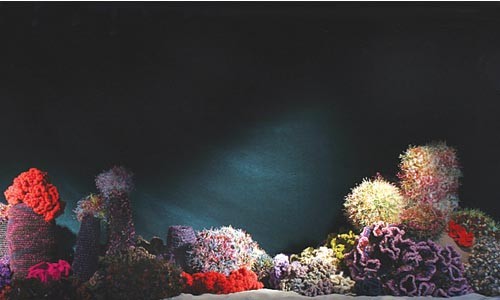 Oceans endeavor: "Crochet Hyperbolic Coral Reef," by The Institute for Figuring.
6 Billion Perps Held Hostage! Artists Address Global Warming, at The Andy Warhol Museum, takes a stab at confronting the leviathan of environmental destruction through visual media. A dozen or so artists -- an international roster -- pursue their quarry from every angle, utilizing parody, earnestness, abstraction and statistics, even sidling up to agitprop. But while the assemblage offers some good feints, it ultimately falls short, like poking at a colossus with a plastic spork.

Granted, when the art here works, it's full of power and presence, making this show a must-see. The Yes Men, rabble-rousing pranksters with hearts of gold and balls of steel, score high with "Halliburton Solves Global Warming," their entry at last year's Catastrophic Loss Conference, in Florida. Posing as Halliburton reps (how did they DO this?), they presented mock-ups of The Survival Ball, a self-sustaining device that protects the wearer when the effects of global warming (floods, hurricanes, broken levees, etc.) threaten life as we know it. The suits are displayed, along with video of their presentation to a group of very serious businessmen, who seem to be buying it.

"Food, Carbon and the Commons," by local artists Steffi Domike, Suzy Meyer and Ann Rosenthal, demonstrates how the transport of food impacts the earth, showing the differences between local, national and international offerings with simple yet striking visuals. "Crochet Hyperbolic Coral Reef," by The Institute for Figuring, is plain lovely: woven reinventions of undersea formations in fuzzy concoctions of color and texture that you just want to pet. And Pittsburgh-based Bob Bingham's unrealized proposals for the greening of local architecture are as stunning as they are practical, and leave the viewer wondering why they haven't been actualized.

The most provocative, effective and affecting works, however, are from Cai Guo-Qiang: three videos and two walls of works employing gunpowder as the primary media. The video "Making Gunpowder Drawing, Black Fireworks" documents the artist's process. We see him meticulously arranging explosives in a relief map of shapes, then blasting away. The result, after clean-up squads of giggling assistants bodily smother the flames, is moody, evocative landscapes whose spindly lines and charred blurs suggest cities sorely wounded, but not beyond repair; they seem to struggle to heal, and recovery appears imminent.

Other videos record Guo-Qiang's outdoor installations, in which detonated explosives form clouds of smoke into glorious, transient sky-sculptures. These works endow the tools of annihilation with undeniable splendor: elements intrinsically vile metamorphosed into something gorgeous -- like the white plastic bag in American Beauty, but created rather than captured.

Yet 6 Billion Perps is compromised by some odd curatorial choices by the Warhol's Matt Wrbican. Warhol himself, for instance, shows up with a whole room of works and clippings, some baffling within the context. ("Suicide," with a jumper in mid-flight? Photographs of car-accident fatalities? Really?) Trademark silkscreens of endangered species make more sense -- though, rather than contemplate the theme, viewers might simply ponder how closely, given the same artistic treatment, members of the animal kingdom resemble Bianca and Liza.

Some on-theme entries, meanwhile, handle the material with Naughahyde gloves. "The Climate Mash" animation, by Bobby Pickett and Horseback Salad, uses "The Monster Mash" to satirize George W. Bush. Great. But he's characterized as a goofball at whose antics we can chuckle rather than the rampant fucking menace he truly is. Having Dubya douse himself with oil a la Jennifer Beals in Flashdance is a start, but push it some: It's animation, the possibilities are limitless. Show him flayed alive, chained to a giant redwood and shitting blood as his entrails are torn from his stinking belly by voracious bald eagles in red-, white- and blue-spangled top hats. The misdeeds in question are aggressive enough to merit more than muttering under one's breath at the machine.

Still, to be left unsatisfied isn't necessarily a bad thing. Insatiateness can prompt further investigation, and discontent can motivate change. It's fantastic that the Warhol has fashioned 6 Billion Perps. One hopes similar collections will be added to its schedule. But next time, please, give it two floors. We want more.