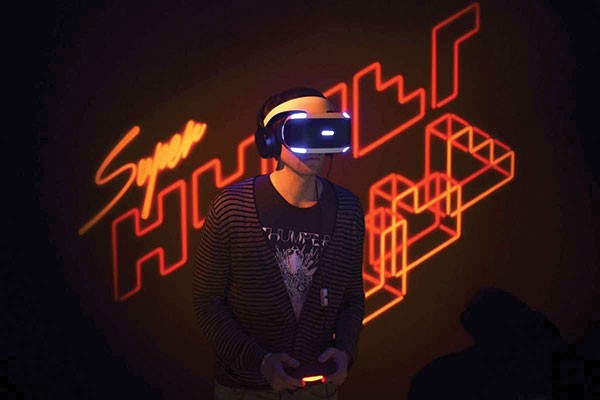 Thu., Oct. 6-Sun., Oct. 9. Various venues. via-festival.com
If you think that virtual reality, like video games, is all about guys playing first-person shooter, get into Weird Reality. The VR salon, part of this year’s VIA Festival, aims, in part, to disentangle the medium from what VIA co-founder and artistic director Lauren Goshinski calls “tech-bro culture.”

Offerings include Milica Zec and Winslow Porter’s installation and VR film Giant, which puts users into the experience of living in a war zone, expanding their potential for empathy. “We’re not just exploring the artistic potential of VR, but topicality,” says Goshinski. New York-based studio Scatter presents CLOUDS, its interactive documentary on art and computer code (with each viewer’s actions creating a unique viewing experience). The Kokoromi collective debuts SUPERHYPERCUBE, a spatial-reasoning game in 3-D. On the absurdist side, there’s Laura Chen’s “communal bathroom experience” Poop. And on Oct. 8, Brooklyn artists Salome Asega and Ayo Okunseinde present the VR version of Iyapo Repository, their resource library for artifacts that “affirm and project the future of peoples of African descent.”

While VIA is known for its ticketed music showcases, a host of other cutting-edge performances and exhibits are either free or pay-what-makes-you-happy. At the East Side Bond building, see the exhibit Exquisite Donut, a code-based take on the old game Exquisite Corpse in which artists extend each other’s “digital drawings” on computer monitors sight unseen. On Oct. 7, at the Alloy Studios, see Brooklyn-based performance duo FlucT, who use the female body as tool for resistance and exploring power in society, and Houston’s Lisa E. Harris, whose compositions and performances are pushing boundaries in opera. On Oct. 8, on the grounds of East Liberty Presbyterian Church, Baltimore’s Hoesy Corona presents two performances of Nobodies Gala, a short work inviting viewers to join in “nobodying,” the act of “making somebody, nobody.”

Oct. 8 also brings the premiere screening of Underground — Afronaut(a), the fourth of local artist Alisha B. Wormsley’s anthologies of experimental and futurist short films “representing a diverse array of racial, sexual and national identities and perspectives.”