Step into the ring with one of the messiest events in PIttsburgh. 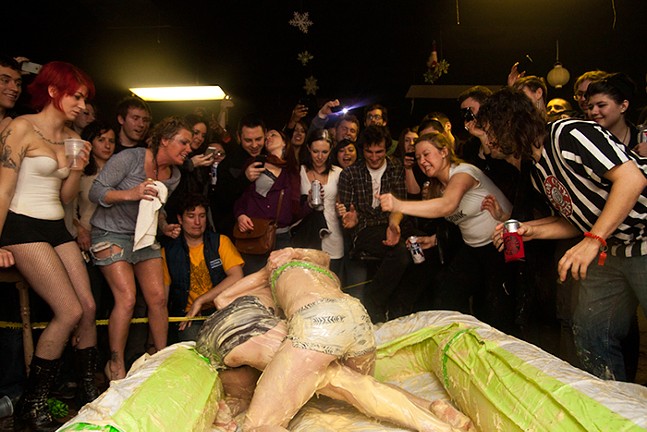 “One of my girlfriends that I worked with said there was a bar on the strip that had mud wrestling and she’s like, 'you get paid to do a match even if you don’t win',” says Ryon, who now lives in California. “I did a couple matches and was not successful at winning, but it was really fun, the girls were really nice, and it was a different way of getting your energy out.”

Two years later, she moved to Pittsburgh and, with the help of local DJ Todd Keebs, started the first Massacre at the Lawrenceville bar Belvederes. But unlike in Vegas, she decided to go in a less dirt-based direction by inviting women to wrestle in 120-plus pounds of vanilla pudding.

“One year they sold out of vanilla pudding at Restaurant Depot, so we had to mix in some banana and not tell anybody,” says Ryon. 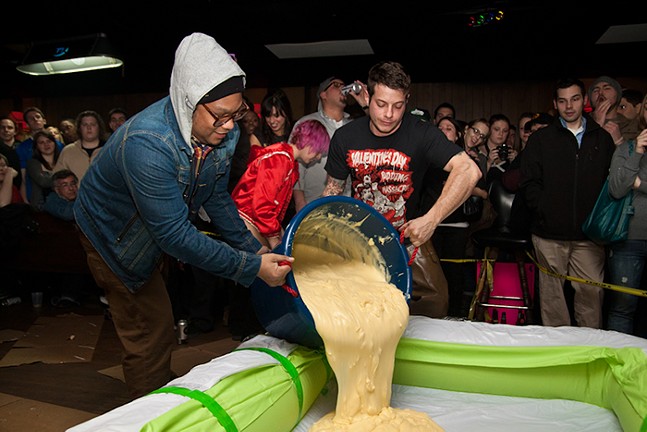 On Fri., Feb. 15, 12 women will vie for a chance to win a cash prize and a championship belt. This year’s competition boasts a diverse group comprised of roller derby girls, athletes, and models, as well as burlesque dancers and an actual pro-wrestler.

Ryon says that while some people might view pudding wrestling as sleazy, the event actually attracts significantly more women than men.

“You’d think this is some event where men go to see girls in bikinis, but it’s kind of the opposite,” she says, adding that wrestlers are welcome to wear whatever they want, be it a bikini or otherwise.

She emphasizes that the event is very community- and family-oriented, with everyone being more focused on having a good time than winning. As a result, the women steer closer to the theatrical antics of WWF wrestlers by creating personas and coming in with theme songs and backstories. “It’s more about the showmanship of their character and how they want to really ham it up or show it off during the event," says Ryon.

This year, Keebs will serve as the emcee and referee for the evening. They also hope to invite a few celebrity judges to the event, with hints that former participants like Mayor Bill Peduto and local drag performer and RuPaul’s Drag Race contestant Sharon Needles may return.

As for whether or not this marks a restart for the Valentine's Pudding Wrestling Massacre, the organizers remain undecided.

"We’re open to seeing how it works, if we want to do it next year, or if we want to wait until the 15th anniversary," says Ryon. "We’re not sure yet."

Regardless, she admires the event's ability to attract a more diverse crowd, including hipsters, pro wrestling fans, South Side bros, and college kids.

"It’s a good mix of all types of people which is nice to see at an event in Pittsburgh because that’s not always the case," says Ryon.