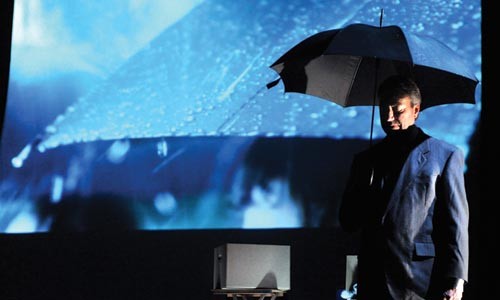 Did you know about "The Umbrella Man?" In JFK assassination films and photos, there's a man on the sidewalk who, as the motorcade passes, raises and lowers an umbrella. Fifty years later, people are still arguing about him. Was he signaling to a shooter ... or shooters? Was he the shooter himself?

Not me. Only after I got home from the Playhouse Rep's world premiere of The Umbrella Man did I learn via web that this seething collection of conspiracy nuts has been around since 1963.

The play, adapted by Edward J. Delaney from his screenplay, introduces us to Lyle Asay -- a man who, unable to process his young son's death, dives into the bubbling cauldron of JFK Assassination Conspiracy. Grief and guilt fuel Asay and he sinks further and further, leaving reality behind.

The problem is that after the first five minutes you could write the play's emotional trajectory yourself ... including an ending that, honestly, if they had shot a small child it would have been less manipulative.

Insight isn't attempted; the play just moves along its mechanized path. There is one surprise: Even here, where the women exist as satellites, the author trots out a hooker with a heart of gold who heals Asay and -- bless her! -- won't take money. (Are you sure you want to stick with that choice, Mr. Delaney?)

With such uninvolving events on stage, is it any wonder our focus is so firmly fixed upon ... the assassination? Though to be fair, we are shown a blown-up projection of the Zapruder film, complete with the explosion shot and Kennedy's skin, bone and brains spraying into the air. How can anything Delaney puts on stage be one-tenth as interesting?

Robert Miller directs what is called "a staged screenplay." I'm not entirely sure what that means, but Miller does great work creating a wholly theatrical experience with Stephanie Mayer-Staley's perfectly fluid stage design. There's a terrific, and very large cast, with a mammoth performance by David Cabot as Asay, bringing interest and complexity to a script short on both.