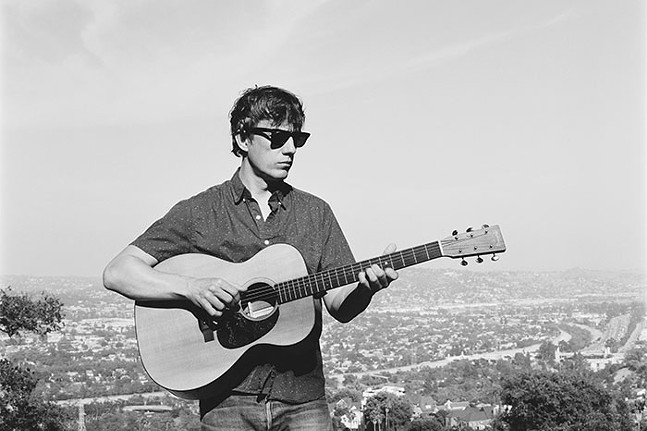 It's a little bogus to always talk about Steve Gunn in the context of his collaborators when his solo work is so good, but I can understand why so many people do it. Gunn's low-key style leaves air in the room to be filled. When he's solo, it's nice to let that space breathe; when he's collaborating, it's enticing to hear the way his cohorts play off and fill that void. His songwriting may be frequently pleasant and pretty, but it's never toothless. There's some dark shit in there, but he never wallows. His music is the kind of person you want to be around.

Some of his best-known collaborators include Lee Ranaldo (Sonic Youth), Shawn David McMillen, Sachiko Kanenobu, Kurt Vile, Mike Cooper, and more, but on this tour — landing at Club Cafe on Wed., July 31 — he's front and center (with his band) on the heels of his excellent 2019 album The Unseen In Between.

Pittsburgh City Paper spoke to Gunn ahead of his show about life as a collaborator and soloist. The interview has been lightly edited for clarity.

Earlier this year, the New York Times published an interview between you and Japanese folk artist Sachiko Kanenobu. You discovered her 1972 record Misora and really connected with it, eventually collaborating with her and going on tour. Are there other albums that are semi-obscure that you found later in your musical career that had a big influence on you?

I’m big on collecting records and discovering albums and learning the story and figuring out where they were made and who made them. A lot of albums that I’ve discovered over the years, I’ve ended up meeting a few of these artists. Another musician that I met was this musician that I ended up collaborating with, named Mike Cooper. He’s an English guy, he lives in Italy. He made a few albums in the ‘70s that are really good, but then he became more of an experimental guitar player in the '70s and '80s and [continuing] up until now. I ended up doing a collaborative project with him about six years ago. We did some touring and played some shows and I’ve been in touch with him since, so that was another one of those albums that I discovered and then did a little research and ended up getting in touch with the person, and actually making music with them. So that was pretty interesting for me.

In that interview, Kanenobu compliments your music for making her feel calm and you talk a little about using music to feel calm. What does calmness mean to you?

I think as it’s gone on, it’s sort of a way to keep the music grounded. In the past, I was a lot more … First of all, I wasn’t really singing, so I was doing a lot of improvising and experimenting with more noisy kind of stuff. It wasn’t until I started singing that I was grounding it more in that way, and I think that my singing style and the way that I express these songs kind of lends itself to that. It almost puts me in that state, that’s a big part of the performance and the songs.

Tell me about writing "Shrunken Heads."

That was one of the early songs that I wrote for the album that came out this year. Earlier, I recorded another version of it that was released, right after Trump was elected. I was thinking about that and channeling my thoughts and feelings about that whole situation, that’s sort of the basis for the song. There’s was some compilation, like 100 songs, 100 days, I sort of wrote it quickly [for that] then re-recorded it for the session for the album. So it’s a leftover track that we wanted to put out there after the fact. That was something that I wrote right around that time.

What was your experience like playing with Kim Gordon, Bill Nace, and John Truscinski at The Andy Warhol Museum a few weeks back?

That was a really fun project. We went to the museum a few months before the performance and we recorded a few hours of music, playing along with one of Warhol’s screen tests. And we recorded it and basically made an album — we did make an album. So then the album was released for Kim’s opening and we performed the piece again live for the opening of the show. And to go back to the Warhol and be around the artwork and to be involved was super fun and exciting for us. And also to have the opportunity to play with Kim was really amazing, because I’ve admired her playing since I was a teenager.

Do you write on the road?

I do. The more practical stuff, like making demos and piecing songs together, really finalizing things doesn’t happen while I’m traveling, but I certainly read a lot and think about things and take notes and come up with ideas and listen to a lot of music and discuss things with the band. A lot of the pieces form while I’m traveling. I definitely learn the hard way that I need to have dedicated time when I’m not traveling to really work and think about stuff and not be so distracted. That’s really what I did for this last album.

I really like the EP you did with Kurt Vile, Parallelograms. It has Randy Newman and Nico covers, old Kurt Vile songs, originals. How did you two put together that tracklist?

That was a session that we did, we were really just hanging out. Cory Rayborn from Three Lobed Records, asked us to be involved with this compilation he was making, which was essentially just two artists getting together. Originally the idea was that we would each have a side, but Kurt and I decided to just go the studio for the weekend and do all the stuff together. Really it was just us hanging out and off-the-cuff deciding what to do. I had already decided that I wanted to cover that Nico song because I really liked it and thought it would be a fun song to cover. Kurt has his ideas and I helped him, played on the recordings on those songs. Then the other kind of original thing I did, again was just kind of spontaneous, just both hanging out. I think that’s why I like that recording a lot because there wasn’t any pressure, we were just having fun. It ended up being a cool album. In my opinion.