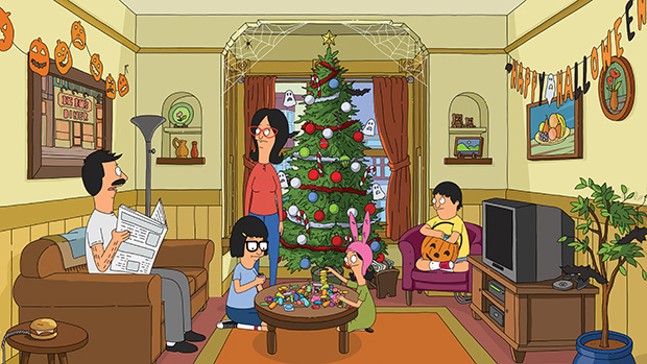 In the weeks following Halloween, Christmas decorations begin creeping into storefronts, trees pop up in windows, and holiday movies start airing en masse on TV. Everyone has their favorite holiday movies, but what no one will admit is that the holiday special episode of a TV show is better than a holiday movie.

A Christmas movie in theaters is a hard sell. With few exceptions, the most popular holiday movies are decades old, and what new movies do arrive in theaters during the season are expensive, critically-acclaimed Oscar bait. And there are almost no movies released about Thanksgiving, because there's such a short window of celebration that the premise quickly seems irrelevant (and people don't clutch to the joys of Thanksgiving as desperately as they do with Christmas).

Enter, the holiday special episode of your favorite TV show. The function isn't quite the same, since so much of TV is aired via streaming platforms, but there is something that makes the familiarity and brevity of a TV show the perfect vehicle for conveying the warmth and weirdness of the holiday season. Already deep into a series, viewers know the characters well enough to know what to get them for Christmas, whereas a movie throws new characters at you and expect immediate and unconditional love. And while holiday movies tend to go broad, trying to appeal to everyone and therefore resonating with no one, TV shows already know their audience and can get into specifics.

In its second season, The Office aired its “Christmas Party” episode, which features Michael hijacking a Secret Santa exchange, Jim attempting to declare his feelings to Pam with a teapot, and the introduction of Bob Vance. Workplace Secret Santa gifts are such a specific awkwardness, but can also be surprisingly sweet, like realizing a coworker actually does know you well and might even be a friend. Movies can't encompass that.

In another personal favorite, Gilmore Girls tackles the specific panic of overlapping holiday plans in the episode “A Deep-Fried Korean Thanksgiving.” Lorelai and Rory have committed to four different Thanksgivings of varying extremes that include a whole bird in a deep fryer and pious Korean guitar playing. A movie would have to wrap up all the dirt Thanksgiving dredged up neatly, but a show can leave it hanging for future debate.

Other great holiday episode classics include Bob's Burgers' “Christmas in a Car,” Mad Men’s “Christmas Waltz,” and It’s Always Sunny in Philadelphia’s “The Gang Squashes Their Beefs.” But pick any of your favorite shows, and they probably have at least one satisfying Christmas episode.

Holiday movies are fine, but holiday episodes work with ingredients viewers already know and love and hate and suspend their daily activities for a brief period of celebration, however warm, awkward, or exhausting that may be.