The Trip to Spain

This third iteration of the Steve Coogan and Rob Brydon road trip is pleasant, if a bit stale 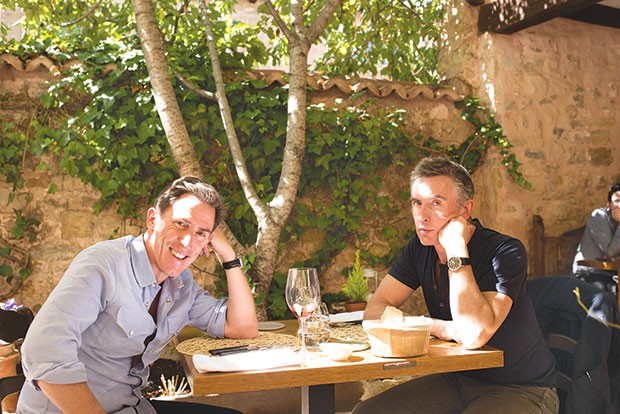 On a Spanish sojourn: Rob Brydon and Steve Coogan

The Trip to Spain

In Michael Winterbottom’s The Trip to Spain, two British entertainers take a week-long tour of Spain, ostensibly to review a number of quite nice restaurants for publication. For Steve Coogan, it’s a useful tie-in to his latest film about a chef. For Rob Brydon, it’ll be a break from his demanding young children. And for both, it will be a change to catch up — as you may recall, the pair had two similar previous outings: The Trip (2010), in which they hit eateries in the north of England, and The Trip to Italy (2014). (All three films are condensed from the British TV series.)

Coogan and Brydon are once again playing semi-fictionalized versions of themselves, and the film adds a splash of plot. Coogan is fretting about the state of his career (his agent has just dumped him), and contemplating a new relationship. Brydon continues to chafe at having to orbit Coogan’s star. Yet despite the loose plot and the scripted assorted factoids about Spanish castles and Don Quixote, the two actors clearly do a lot of improvising. Much of their conversation is competitive banter — who can be wittier, drop more obscure facts. And, of course, who can do better celebrity impressions. The two careen through John Hurt, Roger Moore and David Bowie, among others, and return to golden oldie Michael Caine, by way of Mick Jagger. And speaking of oldies, only one song gets a work-out in this iteration, the bizarro soft-pop tune “Windmills of Your Mind.”

If you’re thinking, “This sounds just like the other two films,” well, it is. Swap in Spanish scenery (very nice), subtract food talk (some fantastic-looking seafood gets short shrift) and add more musing about being middle-aged, and it’s basically the same pleasant, if utterly predictable, outing. Yet, the gimmick has grown a bit stale, and there is something a bit off about watching a pair of privileged white guys carp about their privilege. Even if the film is winking at this affluenza for comic purposes, it’s still present.

And then there’s the ending. It’s only a few seconds, but the last shot of the film is a bum note. While designed to be funny, it relies on religious and racial stereotyping that is not only tone-deaf in 2017, but even less funny after celebrating a pair of wildly privileged and fairly self-absorbed British guys. And it’s doubly odd coming from a director whose films about marginalized communities and immigrants speak of more sensitivity. You may laugh — or you may just have to shrug it off and enjoy the perfectly ordinary end credits as a chaser.