The Trials of Darryl Hunt


Chances are good you've never heard of Darryl Hunt, and the details of his life reduced to a précis -- imprisoned 20 years for a crime he didn't commit -- are apt to be shrugged off busy shoulders. But Ricki Stern and Annie Sundberg's documentary The Trials of Darryl Hunt demands that we stop, look hard and take stock of what Hunt's ordeal reveals about the justice system we believe in from a comfortable distance.

In August 1984, in Winston-Salem, N.C., 25-year-old Deborah Sykes was found in a vacant area downtown, raped and stabbed to death. The brutal crime demanded immediate action, and the police quickly booked 19-year-old Darryl Hunt, on the vague recollection of questionable eyewitnesses and a bizarre telephone tip.

Sykes was white and an attractive young professional; Hunt was black and hung out with petty criminals in beer joints. It was, as Hunt's appointed public defender Mark Rabil characterized it, "a black man accused of raping and killing a white woman ... the archetypal image of Southern injustice."

And so it proved to be. Hunt spent the next two decades tangled in a criminal justice system that seemed willfully incapable of seeing his innocence, or even giving him the benefit of a reasonable doubt.

Emotion, which ran high over a senseless crime, trumped reason and fact, demanded somebody had to be jailed. It did so even after biological samples found at the crime scene didn't produce a match for Hunt, and when witnesses proved dubious: One was a Klansman, another a teen junkie. New bits of evidence produced new trials -- with subsequent appeals -- but no new outcome.

The filmmakers began covering Hunt's case in the mid-1990s, extensively interviewing Hunt, his legal team and community activists who decried the conviction. The first decade of the case is filled in with contemporary interviews and archival footage from TV broadcasts and the courtroom.

Trials presents Hunt's story in an unassuming, linear fashion. There's no gotcha moments, no trumped-up sensationalism, no last-minute plot twist -- just a straightforward account of justice derailed. But that quiet drip-drip-drip of disbelief and outrage builds, and likely helps drive home the film's disturbing conclusion: that in our flashy-news milieu, what happened to Hunt would hardly warrant coverage.

And what of others who might be wrongfully imprisoned, who aren't blessed with community support, a team of never-say-die defense attorneys and a documentary film crew? Just as Trials adopts the manner of the best sober TV news-magazine programs, one realizes how unlikely it is that mainstream media would display the patience and purposefulness of the directors -- not when it's so cheap and easy To Catch a Predator.

If the conclusion of Trials seems low-key when compared to our expectations of satisfying entertainment, consider: It's simple enough to film the moment a 20-year travesty ends; less so to show everything that was lost. The Trials of Darryl Hunt stands in its stead, a damning indictment of a willfully blind criminal justice system. 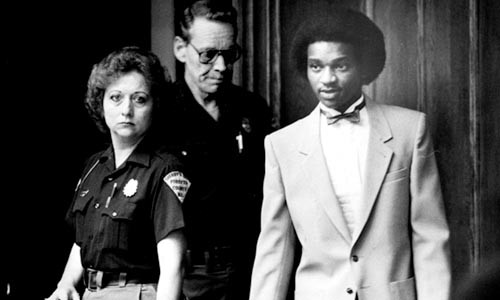