One trip you'd be advised not to book 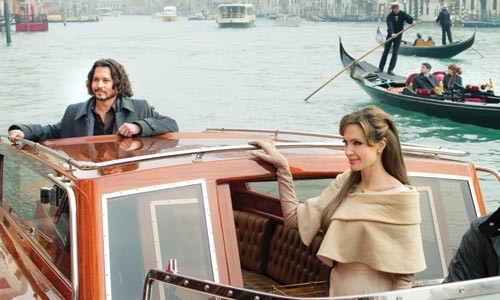 How could such a movie go wrong? Two well-liked, bankable stars; dreamy European locales; a director with an Oscar on his mantle? But make no mistake: If you'd like to spend your holiday money to see what a very glossy but boring flop looks like, The Tourist is your ticket.

We join the film as some scruffily attractive French cops are ogling ... uh, tracking a beauty named Elise (Angelina Jolie). At a sidewalk café, she receives a communiqué from "Alexander Pearson," instructing her to catch a train to Venice and befriend a man who matches his physical type. She burns the note, and sashays away.

The police, who have Scotland Yard on some high-tech video-conference line and have set up an instant burnt-paper-reconstruction lab in their surveillance van, are giddy. This Pearson fellow is wanted for tax evasion, but nobody knows what he looks like. Looks like Elise will lead them right to him.

On board the train, the super-smooth Elise chats up Frank (Johnny Depp), a math teacher from Madison, Wis. Once in Venice, she invites him into her fancy hotel suite, all Campari and roses. They wine and dine, then tuck in for the night. Alas, while Elise lies her lingeried self down on billion-thread-count sheets, Frank takes the couch, albeit a gorgeous red-velvet one.

Meanwhile, the French and English police are watching, and so is a put-out zillionaire (Steven Berkoff), from whom Pearson stole all the money that he now owes taxes on. Mr. Moneybags has also put his stable of well-dressed Russian thugs into "collection" mode. Not surprisingly, they mistake hapless Frank for Pearson, sending the unlucky American scampering across rooftops in his pajamas. Over the film's next hour, these assembled parties variously cross paths in scenic Venice, until we arrive at the not-at-all surprising conclusion.

The Tourist is a remake of Anthony Zimmer, a 2005 French movie. It has been clumsily directed (and co-scripted) by Florian Henckel von Donnersmarck, who made 2006's award-winning The Lives of Others. He is clearly aiming for "Hitchcock light," that sublime combination of sumptuous location, sexual tension, sly comedy and tuxedoed intrigue that defined, say, To Catch a Thief. But he misses, big-time.

Oh, we get pretty scenery and people, but even that seems off. For one thing, The Tourist takes place in some alternate Europe where everybody on the street is impeccably dressed, with nary a sweat-suited tourist or blobby street-sweeper in sight. The plot is so thinly sketched out, it may as well have been a lengthy advertorial for fine perfume or couture handbags.

And what of our stars? Jolie simply slinks around -- in slinky suits, slinky day dresses and slinky evening gowns, and with magnificent tresses of slinky hair hanging just so over one slinky shoulder. She speaks in a breathy English accent; Depp speaks in a breathy American accent, as do most people from the upper Midwest; and the dialogue is strictly pulp novel. I find Depp to be an average actor, who manages to charm audiences by picking roles that let him put his studied quirky hamminess to use. Here, he makes a quite dreadful everyman, from his somnambulant delivery to his affected smoking habits.

Both stars are plastered in makeup, with Jolie supporting heavy kohl-rimmed eyes and, in one scene, impossibly bright-red lips. Adding to his mystique as a math teacher, Depp has ill-advisedly adopted Meg Ryan's gelled, messy pageboy from 10 years ago. All this cosmetic artifice combined with the pair's emotionless, whispery performances creates the impression that perfectly rendered animatronic dolls are the film's real stars. (I couldn't stop staring at Jolie's false eyelashes: They simply defied gravity!)

These two often-engaging actors -- who have adeptly handled their share of entertaining junk over the years -- seemed as if they were floating through on tranquilizers. The whole film was like so much expensive -- but flat -- champagne. The last shot features its stars unfurling sails for a getaway. Who can blame them?