ART • IRL
Head to the opening reception for GLARE, a new group exhibition at the Brew House Association. The show features work by seven artists from the gallery’s latest Distillery Artists-in-Residence program, a year-long studio residency designed to help with professional development. The Brew House says that, for GLARE, the artists “recontextualize remnants of found and recycled material into artworks that elevate light and appreciate the sticky nature of nostalgia.” 6-9 p.m. Continues through May 14. 711 South 21st St., South Side. Free. brewhousearts.org/gallery

COMEDY • IRL
Join Arcade Comedy Theater for a night of competition, laughs, and music during Bracket Night, an interactive comedy game show aiming to crown the Best Female Vocalist of our lifetimes. Arcade Comedy’s panel of experts will “delight and persuade the audience” to help them decide which of the 16 female vocalists should be crowned No. 1. The field of contenders includes Aretha Franklin, Stevie Nicks, Taylor Swift, and many more. Attend for the laughs and help narrow down which singer you think should be named to the top spot. 7:30 p.m. Arcade Comedy Theater. 943 Liberty Ave., Downtown. $12. arcadecomedytheater.com

STAGE • HYBRID
Alumni Theater Company presents The Lost Boy’s | Long Way Home, a live music showcase exploring love, heartbreak, and pain. Featuring music by Maliq Cunningham and James Perry, the production shares the story of each individual’s journey through life, focusing on how they overcame challenges and became the men they are today. Their stories will be joined together through music that will make you dance, shout, and maybe even cry. This performance will be showcased at the Bill Nunn Black Box Theater to a live audience and also livestreamed. 7 p.m. 6601 Hamilton Ave., Homewood. $15. alumnitheatercompany.org

ART • IRL
Lange Studio, a new gallery from photographer and artist George Lange, will officially open during the April Unblurred: First Fridays Penn Avenue gallery crawl. The event includes the debut of 40 Day News Break, a project described as being “inspired by Lange’s New Year’s resolution to take a break from the news.” The exhibition will feature newspaper collage works Lange did in collaboration with his wife and creative partner, Stephanie. These works were previously only posted on social media and will be presented as prints for the first time. 6-9 p.m. 5427 Penn Ave., Garfield. Free. georgelange.com

FILM • IRL
Become inspired and amazed by the outdoors at Venture Outdoors’ Banff Centre Mountain Film Festival World Tour. Captivating films varying from “exploring remote landscapes” to “adrenaline-fueled action sports” will be presented during the fest at the Kelly Strayhorn Theater. The thought-provoking adventure and environmental clips are sure to excite audiences, as well as leave them stunned at the visuals. From standing on the peaks of the mountains to skiing down them, come prepared to witness plenty of adventures. 7-10 p.m. Continues on Sat., April 2. 5941 Penn Ave., East Liberty. $25. kelly-strayhorn.org 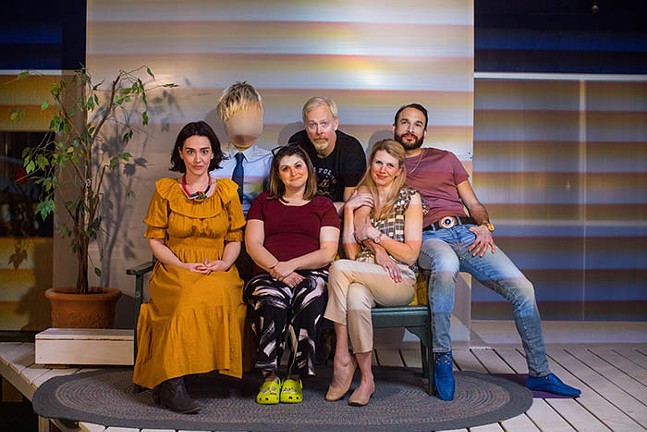 STAGE • IRL
Quantum Theatre will transform the former TechShop makerspace in Bakery Square into a stage for its latest production Plano. Written by Will Arbery and inspired by Anton Chekhov, the show follows sisters, Genevieve, Anne, and Isabel, and the men who “occupy all too much of the oxygen-rich atmosphere around them in astroturf-lined suburbia.” Directed by Adil Mansoor, the show promises a domestic drama and comedy with “flashes of absurdity that ring true.” 2 p.m. and 8 p.m. Continues through April 24. 192 Bakery Square Blvd., Larimer. $38-50. quantumtheatre.com/plano

MUSIC • IRL
Soul Stage returns with a night of music by some of Pittsburgh’s brightest, featuring Treble NLS and JM the Poet, as well as a set by DJ Femi. JM the Poet, originally from South Carolina, has been based in Pittsburgh making music for a few years now and, along with Treble NLS, is a teaching artist and performer with 1Hood Media. Treble NLS comes with a clear message, “Never Lose Sight,” and wows audiences with his flow. DJ Femi is a talented artist who started her DJ career 15 years ago, and has shown no signs of slowing down since. The three will come together at the Greer Cabaret Theater and share a stage for the first time together. 8 p.m. 655 Penn Ave., Downtown. Free. trustarts.org

FEST • IRL
Go back in time and surround yourself with all things retro during the Vintage Pittsburgh fair at the Heinz History Center. The festival, in partnership with Neighborhood Flea, will feature dozens of vendors selling all kinds of vintage goods, from clothing to records to home décor. Shop from sellers including The Pickled Chef, Ada’s Vintage, Keystone Crystals, and more. The cost of the event is included in museum admission, so stick around after attending and check out the museum for a full day of history and vintage goodies. 10 a.m.-3 p.m. 1212 Smallman St., Downtown. $9-18. heinzhistorycenter.org

KIDS • IRL
Looking for a purrfect Sunday? Gather up the kids and head to the Byham Theater for Pete the Cat. The 50-minute show follows Pete, a cat who gets caught “rocking out after bedtime,” and gets sent by a cat-catcher to live with a no-nonsense family to learn some manners. Pete, who brings adventure wherever he goes, gets the whole family to rock with him, aside from Jimmy, an uptight second grader. But Pete and Jimmy go on an adventure that’s fun for the whole family. 2 p.m. Continues on Sun., April 3. 101 Sixth St., Downtown. $12. trustarts.org

TALK • VIRTUAL
The University of Pittsburgh’s Center for African American Poetry & Poetics returns with its spring program, Black Study on Intimacy. The first online event, “Black Sound as Liberation Technology” asks, “What is the connection between Black sounds and improvisations?” Resident poets, musicians, and writers Taylor Johnson, Camae Ayewa (Moor Mother), and Anaïs Duplan will discuss this question and how music, poetry, and other sounds can be used as tools for Black liberation. Other events in the series include a virtual cartooning workshop and a talk curated by Diana Khoi Nguyen. 6:30 p.m. Continues through Thu., April 7. Free. caapp.pitt.edu

STAGE • IRL
Do you have a reality TV lover in your life? The Bachelor Live On Stage at the Benedum Center is for ultimate fans of the hit dating show, even down to the host, former Bachelor contestant and Bachelorette lead Becca Kufrin. This is a night for those who love the romance, love (or loathe) the drama, and can’t wait to see who walks away with a rose. 8 p.m. 237 Seventh St., Downtown. $40-$125. trustarts.org

ART • IRL
The space above Bar Marco will host Mountains are Mountains, a new show by artist Brent Nakamoto focusing on his experience as a Japanese-American artist. Originally from Santa Clara, Calif., Nakamoto now lives in Pittsburgh and has previously shown at various local galleries, including as part of the 2020 exhibition Weight of Things Leftover at Brew House. He has also shown in New York and Missouri, and as far as India. See his latest show during an opening reception in the second floor of Union Hall. 6-9 p.m. Continues through July 2. 2216 Penn Ave., Strip District. Free. instagram.com/unionhallpgh