The Three Rivers Arts Festival gets the most out of its new shipping containers-cum-galleries. | Features | Pittsburgh | Pittsburgh City Paper

The Three Rivers Arts Festival gets the most out of its new shipping containers-cum-galleries.

As obvious symbols of commerce and transport, the Three Rivers Arts Festival's new exhibition spaces -- 10 portable shipping containers still bearing the Yang Ming Marine Transport logo -- may not initially shout "Art inside!" However, because they do contain art, the exhibition titled Contained inadvertently reveals just how much The Point has changed since smoggy mid-century. There is something striking (and surreal) about their expropriation in an area once surrounded by wharfs and shipping vessels.

Located on and near Market Square, the containers are without windows to disrupt the fabricated illusions within. Their 8-by-8-by-40-foot dimensions have allowed 10 regional artists to effectively transport visitors elsewhere. And, like sanctuaries, the boxes require visitors to step up, separating them from the actuality of the street.

The concept of the sanctuary-cum-journey is perhaps most evident in Jocelyn Horner, Katherine Young and Molly Weaver's "Water & Wine," which conflates two Steeltown cultural hubs: bars and churches. Sporadically decoupaged with images of saints and bartenders, churches and bar facades, the walls are painted with the insalubrious colors of paneled pubs and shadowy religious grottos. Lacking any significant light source, the space is every bit as dark. And the culmination of the trek from provisional narthex to nave is ... an altar-shaped bar. Still, while the idea is intriguing, even provocative, the seemingly hasty assembly diminishes its punch.

Meadville-based photographer Robert Raczka, meanwhile, also presents a journey, through and around Market Square at dusk. His series, "Stanwix Street at Fort Duquesne," depicts long-standing businesses and iconic local restaurants, like The Oyster House, and captures the touching, multi-generational perseverance of the area's agreeably eccentric personality. Beyond the single band of medium-scale photos, however, Raczka's box is so spartan that visitors might feel swallowed by unused space.

Narrative journeys are the focus of Adrienne Heinrich and Patricia Sheahan's "Empowering the Object." A series of borrowed items, like a gleaming Rolls Royce grill and a bin stacked with intricately fabricated laboratory glass, are each accompanied by poignant, recorded narratives that make each object a matter of universal human interest.

More archeological than anthropological is the meticulously crafted faux excavation "The Pok Cave," by Chilean-born Alberto Almarza. Pinch pots and fertility fetishes are balanced on sandy mounds beside (disturbingly realistic) clay and burlap mummies. On one side of the space is a textured rock face, riddled with softball-sized openings. Each opening, lit from within, is capped by a magnifying lens for viewing a treasure-trove of miniature artifacts.

The visually lush "Twist, Tie, Multiply: Hands in Action," by fiber artist Karen Page with Anna Divinsky and JoAnna Commandaros, encourages viewer participation. Featuring textile-based organic forms, the installation is also meant to develop organically: Every visitor-made contribution, composed of dried beans and gauzy fabric, is used to fill out the curvilinear metal armatures at the space's heart. Visitors' works appear alongside crocheted sea anemones, knitted corals and gorgeous oil-pastel pods made by the artists themselves.

Asking visitors to traverse a Zen garden into a fully functioning tea house, Anna Mikolay's immaculate "Zen Zones" is an extremely well-packaged experience. The aim of this urban refuge -- to inspire inner calm -- is enhanced by its fragile elements, like the wax-paper origami envelopes that serve as patchwork scrims between zones.

Unavailable for review on opening night were works by Joshua Space and Ryan Keene.

Arts Festival Executive Director Elizabeth Reiss' decision to use the shipping containers is both timely and astute. In Pittsburgh's 250th anniversary year, it unconsciously references The Point's own gritty shipping history. It also finds the local art scene is keeping pace with the art world's movement toward site-specific installation and multimedia fusions. 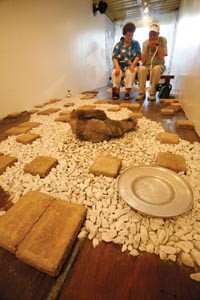