Each January, architecture enthusiasts eagerly await announcement of the National Awards from the American Institute of Architects. There are 11 Honor Awards this year, and they trend toward high-dollar institutional buildings for education and research, with a boutique distillery added for good measure. The designs are invariably sleek and uncompromising, portrayed in dramatic and flattering photos.

The pictures, of course, are part of the problem. Whether as Alberti's art or Vitruvius' delight, visual enjoyment has been an intrinsic part of the appreciation of architecture since ancient times. But there should be more to the profession than the looks of buildings. To be truly successful, architecture can and must build and serve communities. Such values drive the existence of the Sant Lespwa Center of Hope in Hinche, Haiti, by Pittsburgh's Rothschild Doyno Architects. The project recently won a National Honor Award from the AIA, which no Pittsburgh firm has done since 1999.

The client for the Sant Lespwa Center of Hope is World Vision, an international relief agency for which Rothschild Doyno had done a distribution center in Sewickley. After the devastation of Haiti's 2010 earthquake, which left hundreds of thousands homeless, World Vision approached several firms to sketch designs for a community center outside of Hinche, a city of 50,000. While other firms dutifully submitted drawings, Rothschild Doyno instead proposed a process, "Not to make assumptions from afar," says principal Mike Gwin. "Instead we would first go there and spend some time in the communities." 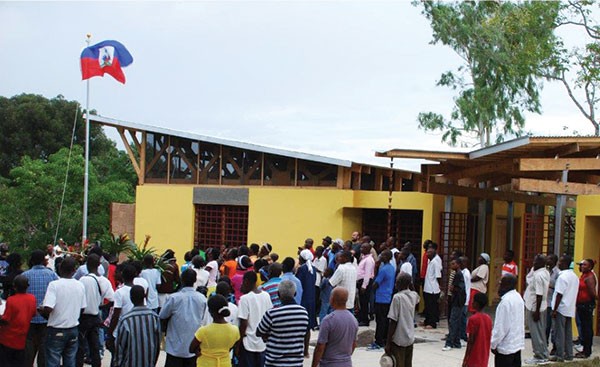 The process has served the firm and its clients well in residential projects and community centers throughout Western Pennsylvania and beyond for more than 20 years. "It's part of our DNA," says Dan Rothschild. Here, it won them the commission. Gwin began by traveling to Haiti and meeting with all varieties of constituents, "spending time with elders and doing activities with children," he says. Local subsistence farmers and building tradespeople were part of the dialogue.

By numbers, it is a 5,000-square-foot community center that has classrooms, community rooms, administrative spaces and job-training facilities, with an adjacent soccer field. Throughout, it exhibits the wisdom of architects who respond rather than dictate. It is carefully sited and shaped to capture prevailing breezes, while resisting hurricane-force winds. Following local practice, it provides shade from direct sun while admitting usable daylight.

Area builders guided use of traditional materials and techniques, such as a river-stone foundation, and woven palm for parts of the enclosure. Meanwhile, the architects took traditional local concrete construction and updated it with better seismic performance and durability. The construction process also became a job-training program for 100 people to learn marketable trades that are in significant demand in post-earthquake Haiti.

Equally admirably, the building is truly sustainable. "It is adjacent to a dirt road with no utilities," explains Rothschild. "This was a requirement, not a choice." Since trucking water in would have been cost-prohibitive, the building instead gathers rainwater from carefully shaped roofs and stores it in a cistern, whose capacity of 9,000 gallons constitutes a year's supply. It has its own septic system to treat wastewater. Likewise, the building generates its own electricity — for lights, water pumps and computers — from rooftop photovoltaics, which are also self-sufficient. A Pittsburgh skyscraper might boast of using less energy from fossil fuels than its neighbors, but the Sant Lespwa Center of Hope is a true net-zero energy building.

All of its architectural elements contribute to a building that is functional and handsome in a strangely familiar way. For all of its ethical and environmental virtues, the Center of Hope also photographs well. Its angular footprint, canted roofs and didactically exposed structure evoke some timeless Modern architecture of the 1930s, when practitioners such as LeCorbusier and Alvar Aalto believed the regional wisdom of vernacular architecture could bolster the artistic integrity and suitability of their work. In the 1970s, preservationist and historian James Marston Fitch argued that vernacular builders could teach architects lessons about ecological conscientiousness.

Only now, however, could such a structure be a net-zero energy building with lights and computers. Only now could it draw so substantively from its users and constituents with such a gentle touch. Now is also the time for the AIA to recognize such achievements as the fundamental substance of architects' work. Says Rothschild, "Architects don't just design buildings, we design communities."