By Alex Zimmerman and Rebecca Nuttall 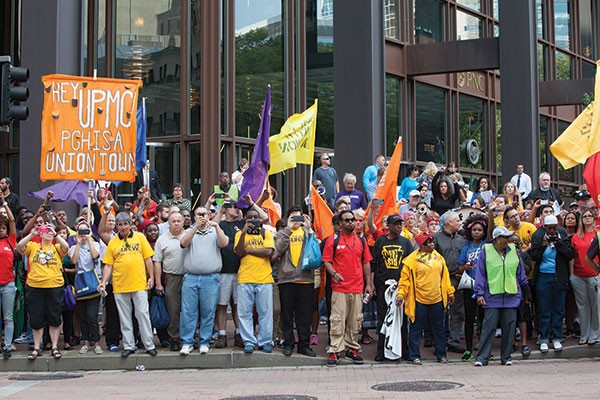 Photo by John Colombo
Hundreds of demonstrators gather at a rally outside UPMC's Downtown headquarters July 30.

On July 30, hundreds of protesters shut down a block of Grant Street in front of UPMC's Downtown headquarters. There were chants of "$15 in a union!" and nearly 30 arrests of those who sat in the middle of the street, blocking traffic.

The scene, and the complaints, were familiar: UPMC has been dogged by a labor dispute since 2012, along with years-old gripes about its tax-exempt status and an ugly debate over its battle with insurer Highmark. Demonstrators brought similar grievances to UPMC's door in early March, when they also shut down Grant Street.

But behind the scenes, UPMC is in a less contentious position today.

Photo by John Colombo
Tassi Bisers is led away in handcuffs after being arrested for blocking traffic July 30.

Days before the July protest, Mayor Bill Peduto's administration dropped a city lawsuit challenging UPMC's tax-exempt status. "I prefer to negotiate at a table where there aren't guns," Peduto explained to City Paper after making the decision. Doing so, he said, would allow "a broader conversation with the entire nonprofit community that has viewed [the lawsuit] as an attack from the previous administration."

UPMC responded to the overture by dropping a counter-suit, which claimed the giant nonprofit was being unfairly singled out by the city.

While campaigning for mayor last year, Peduto had supported the suit: Shortly after winning the May 2013 Democratic primary, Peduto told CP that he was "not going to change my opinion on fracking in the city, or the UPMC lawsuit. I've planted those flags already." The issue might have played a sizable role in the campaign. According to a poll released earlier that month by Make it Our UPMC, "[m]aking UPMC pay its fair share of taxes was named as the top issue [for] 30 percent of voters." The group, which has pressured UPMC on a variety of issues, says that three-quarters of poll respondents said their vote would be motivated by a pledge to "find a way to ensure UPMC pays its fair share."

Peduto says he still intends to do just that, noting that he carried on with the lawsuit until a judge's recent ruling against it. "I did keep my promise" by continuing with the case to that point, he adds. The city could refile the case, he adds, although it is choosing not to do so because the lawsuit was a "two-sided sword" that "held the city back from being able to do anything with any of the nonprofits."

Some veterans of the UPMC fight approve of the decision. Neal Bisno, one of the labor leaders battling UPMC, says his union members "fully support" Peduto's efforts. "Pittsburgh wants real change at UPMC, which continues to benefit from generous tax exemptions and spend millions on lavish executive pay ... while keeping many service workers in poverty."

"It's a tactical move," says Pittsburgh UNITED executive director Barney Oursler, a longtime activist, of Peduto's shift. "This is a way he can get [UPMC CEO] Jeffrey Romoff to actually bargain."

UPMC itself declined comment on this story. But Peduto's move has raised some eyebrows.

"I was concerned that it could be unilateral disarmament," says state Rep. Dan Frankel. "To me, it remains to be seen whether [dropping the suit] is going to make [UPMC] do the right thing."

"We'll be prodding the mayor's office to be aggressive in their negotiation," Frankel added.

Some rank-and-file workers, and average citizens, also have doubts.

"When are we going to set the standard?" said Nancy Smith, a member of the United Food and Commercial Workers union who attended the July 30 rally. "Who's going to have the cojones to stand up to UPMC?"