Life in this dystopic drama is filthy, fraught and feral 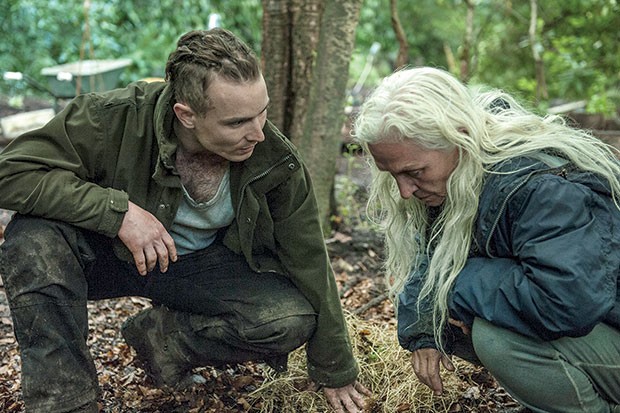 Writer-director Stephen Fingleton’s lean but intense drama is set some time in the near future, after catastrophic events have destroyed civilization. Or at least that’s how it seems as we follow the morning routine of the titular survivalist (Martin McCann), a young man living in a ramshackle cabin deep in the woods. He’s constantly armed and suspicious of any noise; he makes a meager meal; and he checks on animal traps and tends a vegetable garden. It is a joyless subsistence.

Then from the trees appear a mother (Olwen Fouere) and her teenage daughter (Mia Goth). They’re eager to make a trade for any food, and, after some tension, a deal is struck: The girl will provide sex, and the women can eat. Perhaps against his better judgment, the man lets the women stay, and an uneasy household takes root, in which nobody trusts anybody and the deprivation makes everybody’s behavior unpredictable and dangerous.

The film offers plenty of tension, and a raw scene or two (the maggots are so much worse than any nudity). There’s little dialogue, and little plot, though it’s inevitable something is going to give. It does seem to provide a more realistic account of day-to-day life after civilization has collapsed, taking with it social, legal and economic order, as well as infrastructure basics like water and energy. Life is filthy, fraught and feral, kill or be killed. The Survivalist is well done and well produced, but it’s a grim tale.