The Summer Company's A Slight Case of Murder 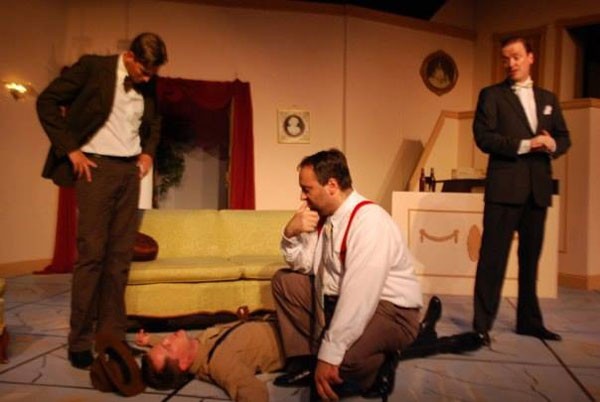 A SLIGHT CASE OF MURDER

Damon Runyon specialized in writing sentimental tales of lovable mugs, gamblers and gangsters — as perhaps best seen in Guys and Dolls, the musical based on several of his short stories. His style even earned an adjective: "Runyonesque."

A Slight Case of Murder, which Runyon wrote with playwright Howard Lindsay, is a Runyonesque take on former bootlegger Remy Marko, who's turned post-Prohibition brewer in an effort to go "legit" for the sake of his daughter. The transition isn't easy, and Marko has to leap such hurdles as possible bankruptcy ... and four murdered poker players in his guest bedroom.

But in this production from the Summer Company, it's Runyon's particular style that's missing. Too few of the cast achieve the charm that makes his characters so memorable.

There are notable exceptions. In the role of Marko, Frank Schurer expertly channels Edgar G. Robinson and William Powell. (He sounds like Robinson and looks like Powell.) Also, Schurer fully captures the gauche "new money" gangster.

Tim Syciarz is nothing less than delightful as State Trooper Chance Whitelaw. (Naturally, Remy Marko hates police officers. Imagine his thoughts when he finds out his daughter is engaged to Whitelaw!) The expressions on Syciarz's angelic face elicit gales of laughter from the audience. In addition, he plays physical comedy very well.

A few members of the ensemble also manage to capture Runyon's style: Nick Osbourne, as Singer (who also sings and plays the piano); Matthew Rush, as the cook, Guiseppe; and Anthony Chase, as Kirk, are standouts.

Overall, the show moves at a brisk pace. But while director Jill Jeffrey has the challenge of herding a large cast (22 in all), she doesn't fully succeed. Too often there are awkward stage pictures, blurred focus in scenes, and actors upstaging each other. The party scene in Act II is particularly unfocused. Many things are happening, but Jeffrey doesn't always lead the audience's eye where it should be to catch important plot points. Finally, this past Friday night, there were some distracting problems with the lighting. Hopefully, those will be repaired before the show re-opens this week.