"You can't expect to succeed if you are only putting in part time." 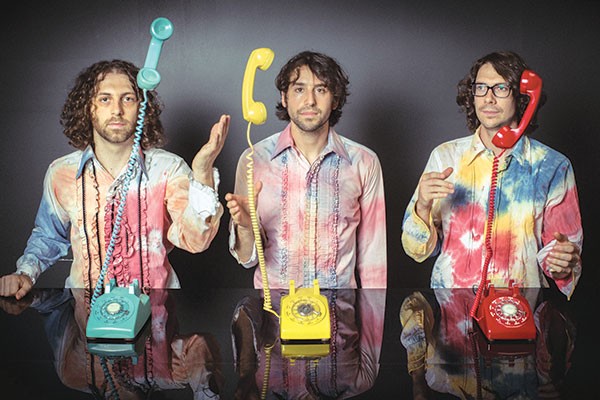 Connecticut-based neo-soul trio The Stepkids has a good bit of Steely Dan and Earth, Wind & Fire in its sonic DNA and Thom Yorke among its fans. The band is now touring behind its second album, Troubadour. Lead singer/guitarist Jeff Gitelman spoke with City Paper about his long musical path.

You lived the first nine years of your life in a Soviet state called Moldova. What was your life like back then?

Well, we moved [because of] racism and better opportunities: We were definitely minorities there, being Jewish. My dad plays violin. It's near Romania and stuff. A lot of the folk music of the Moldovans is similar to Romanian music and a lot of Eastern European folk music. From a very young age, it seeped into me subconsciously.

How did that lead to picking up the guitar?

When we were still in Russia, I fell in love with The Beatles. The song "Yesterday" was the first song that made me feel divine by listening to music. My dad has this Beatles album that was a Russian-only compilation of love songs. We also had a piano, and my dad would play Prokofiev's Peter and the Wolf, and I just fell in love with melody. [When] we came to America, I discovered Jimi Hendrix and, because it was the early '90s, metal, and picked up the guitar. From there, I heard Wes Montgomery and wanted to study the jazz language. ... I then got into Stevie Wonder, who my dad was always listening to, and Marvin Gaye. I went to [the Berklee College of Music] and started writing songs almost as a rebellion against the academic side of school.

Your first job out of college was guitarist in Lauryn Hill's touring band. How did you land that?

I loved hip hop and, in the early 2000s, when I went to school, that's when people first started translating from machines back to humans. The Roots had been playing for a while, and it became fashionable to have live instruments. I had backed rappers, the new rock stars, and I understood that I was acting as a sample. So when Lauryn Hill was having auditions in Boston and New York, I was able to translate that very well.

How long were you touring with her?

Just a few months. She wasn't the most ideal boss to work for, but after that I started climbing up the ladder. I worked with Bobby Brown and I got the job [touring] with Alicia [Keys].

I probably shouldn't go on about that. Let me put it this way: It was the best first step in the music industry to have, because it prepared me for the worst. It broke my heart right away about how tough music can be, and how it can cut you if you are sensitive to it. It showed me where musicians can stand in the music-business hierarchy unless they work to get something of their own going.

When you formed Stepkids, did you have any fears that once you got off the ladder you would never be able to climb up again?

Sometimes, but I just saw from other people that sometimes you have to commit everything to something. You can't expect to succeed if you are only putting in part time.

Your sound is considered vintage and a lot of it sounds like it could come from 1972. Is that something you tried for consciously?

Maybe on the surface, it's like that, particularly on the first album. But there are signs of modern civilization. On every song, there is a sign this is futuristic album, not vintage music.

Is there anything else you'd like to say about the show?

I think the fans should know that, like we have a unique voice on our recordings, we also have a unique style in our performances. We're doing something that no other rock band is doing at the moment, as far as I know. We are a rock band that does choreography, like Earth, Wind & Fire, The Jackson Five, ZZ Top, The Bee Gees — those kind of bands. It might be something someone else is doing. I haven't seen it.

What inspired that? Just as a throwback?

It was thinking of people like Earth, Wind & Fire, who were the whole package. They were great musicians, but they never forgot to be entertainers as well. I think our generation lost that, and we're the ones to bring it back.